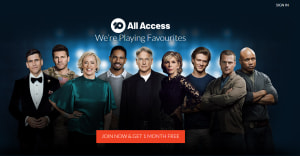 Network Ten has officially launched its subscription video on demand service (SVOD) 10 All Access with a monthly cost of $9.99.

The anticipated platform was revealed to be coming to Australia earlier this year, giving users access to more than 7000 commercial-free episodes of CBS content.

For $9.99 a month plus a month free for new subscribers, 10 All Access will offer exclusive original series, current and previous seasons of select CBS and Ten shows, classic TV series, as well as the ability to live stream CBSN, CBS News’ 24/7 streaming news service.

The platform is a localised version of the CBS All Access platform, which has a higher price tag of $9.99USD and offers users a "limited commercials" package for $5.99, with ads inserted at the same points as a linear broadcast.

AdNews understands that while there are no immediate plans to engage advertisers through a similar method, the network will explore how membership data obtained through All Access can support clients in the broader Ten ecosytem.

This includes using member data to engage with Ten users across other platforms including 10Play and 10Daily.

“10 All Access gives us a fantastic new avenue to engage audiences with premium entertainment any way they want it," Ten CEO Paul Anderson said.

"It fits perfectly into the 10 family alongside our broadcast channels, Ten, 10 Boss and 10 Peach, our catch-up service 10 Play, and our news and entertainment site 10 Daily. We’ll continue to evolve 10 All Access with more great content to binge on and more product features to enhance the viewing experience. We are just getting started.”

All Access will feature more than 7000 episodes of content and be available on iOS and Android mobile and tablet devices, Apple TV, Android TV and Chromecast.

Subscribers will be able to watch on three screens simultaneously and the service will be launching on additional platforms in the coming months.

“10 All Access brings thousands of episodes of CBS and 10’s leading programming to digital platforms, making it simple for fans looking for more of their favourite television content to get it in one easy-to-use, multiplatform service," CBS Interactive president and CEO Marc DeBevoise said.

"We look forward to continuing to expand 10 All Access to additional platforms and bring TV fans even more of the programming they want to watch.”

In the US, CBS All Access also streams content from its pay-tv channel Showtime, which is currently tied up in a multi-year deal with Stan in Australia.

Speculation has mounted as to whether the launch of All Access in Australia could lead the CBS pulling Showtime content from Stan and adding it to All Access.

Stan CEO Mike Sneesby previously told AdNews that he had no concerns over the product's launch in Australia, emphasising that its arrival would have no impact on Stan's current deal with CBS.