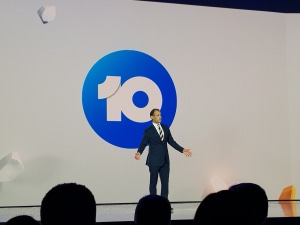 A revamped look, new logo and multichannel strategy, the winners of the inaugural Pilot Week strategy and a greater push for local content in 2019, all make up the announcements at this year's Ten Upfronts event.

In the final upfronts of the three major commercial networks, Ten came out swinging, with a raft of new announcements that also saw its parent company CBS flex its content muscles.

During the upfronts event, held at the International Convention Centre in Sydney, Network Ten retired its previous Ten logo across all assets with a new logo, colour scheme and "tone of voice".

The network's multichannels were also subject to the rebrand as One has been rebranded to become ' 10 Boss', targeting women and men over 40, while Eleven has become '10 Peach' targeting 16-to-39-year-olds looking for "escapist entertainment".

Ten says research with its insights team, external industry interviews and its staff were the key drivers behind the decision to sharpen each channel's focus.

“Our aim here is simple: make our brands more distinctive, give them stronger cut through in a hyper-competitive media sector, ensure greater consistency across our family of brands, strengthen our already deep engagement with audiences, and underline our entertainment credentials," Network 10 CEO Paul Anderson says.

"If you cut out the jargon, what this means is that TV’s wild child has its voice back."

“We have changed things up and not only do we have sparkling new looks and brands for 10, 10 Boss and 10 Peach in 2019, with the imminent launch of 10 All Access and other big initiatives the time is right to connect the whole family of Network 10 platforms and channels.

The new look and branding for 10, 10 Peach, 10 Boss and the rest of the family were driven by Network 10’s in-house design team and the branding design agency Principals, which worked with 10 to deliver the network-wide rebrand.

How did Pilot Week pan out?

Ten chief content officer Beverly McGarvey previously explained that the success of the shows wouldn't be based solely on ratings, but social media buzz, catch-up views and votes, which could be made on the Tenplay platform.

The strategy was met with controversy, criticism and varied levels of interest. Below are the four that made the cut off the back of Pilot Week:

Taboo: Each week a comedian spends five days getting to know people of a disadvantaged group, culminating in him performing a stand-up special about them based on his experience. The show generated 391,000 national and 277,000 metro viewers.

Kinne Tonight: Comedian Troy Kinne hosts a half sketch, half stand-up half-hour programme which takes a look at some of the issues often overlooked in day-to-day life. 496,000 national and 404,000 metro viewers tuned in to watch the show's premiere.

Trial by Kyle: A courtroom style programme which features radio host Kyle Sandilands as a Judge Judy type character, acting as a mediator in 'controversial' cases. Sandilands is assisted by former Bachelor winner and lawyer Anna Heinrich. It was the highest rating show with 519,000 national and 385,000 metro viewers tuning in.

Bring Back...Saturday Night: A live Saturday night variety show, hosted by Rove McManus. The pilot featured well-known Australian comedians including Judith Lucy and Merrick Watts. It was the programme with the lowest viewership with 297,000 national and 203,000 metro viewers.

Ten says that based on the success of the initiative, Pilot Week will be returning in 2019, with 10 now open to ideas.

“We listened to feedback and combined this with a range of other measures from timeslot to demographic performance before deciding which programmes we would commission to a full series," McGarvey says.

“With Pilot Week we opened up the later evening and Saturday night timeslots to new programming formats and were able to gauge how audiences engage with these formats at these times."

Despite the slew of international content that will be brought to market through the CBS ownership, Ten will still be home to 13 new Australian shows in 2019.

The new Network 10 year kicks off in mid-January with a new season of I’m A Celebrity…Get Me Out Of Here!, as Julia Morris and Chris Brown step back into the hosting role. The show will also be accompanied by a new Saturday night I’m A Celebrity show, live streaming on 10 All Access.

Much like Nine and Seven, Ten will also be making a play for its share of the constantly growing drama audience.

Next year the network will add three new local dramas: Five Bedrooms, the story of five very different people who meet on the singles’ table at a wedding and decide to buy a house together; My Life Is Murder with former Xena Warrior Princess and Spartacus star, Lucy Lawless as Alexa Crowe, a brilliant, insightful, and completely-without-filter investigator; and The Secrets She Keeps, a dark tale of two women from very different walks of life who have one thing in common – explosive secrets that could destroy their lives.

Ten says sport will remain a big part of the 10 line-up for 2019, with three of the races that "transfix the nation" on 10: the Melbourne Cup Carnival, Supercheap Auto Bathurst 1000 and the Formula 1 2019 Australian Grand Prix.

Chris & Julia’s Sunday Night Takeaway, Dancing With The Stars and Changing Rooms will all debut, while Bachelor In Paradise, Hughesy, We Have A Problem, Ambulance Australia and Gogglebox (which will have two runs in 2019) all return in 2019.

The success of both The Bachelor and Survivor Australia has secured each show another season in the back end of 2019.

“We’ve had record-breaking catch-up numbers on 10 Play, with all of our major shows recording their highest video views ever. We also launched 10 Daily to a brilliant start. It is growing every month, with over 1.04 million visits in September alone,” McGarvey says.

“Next year we will strengthen our position as leaders in escapist entertainment and we’ll have differentiated flagship content targeting people under 50s, 50 weeks a year, starting right now across all our platforms."

Data will also be a key offering across 10’s suite of sales solutions with a robust data strategy in place to significantly build the company’s member base in 2019.

To support its data strategy, Network 10 has announced a partnership with Tealium, a leader in real-time customer data solutions.

Tealium will work with 10 to unify customer data collection across its digital platforms including 10 Play and 10 Daily, allowing the company to create audience segments in real-time.

The audience segments will enable 10 to deliver targeted solutions for advertisers and personalised experiences for consumers.

“Having a sophisticated data strategy is crucial in creating a strong multi-platform sales team. The new advertising norm is to offer solutions that are data-driven, cross-channel and across devices. Our partnership with Tealium will help fast-track the development and sophistication of our data solutions," Ten chief sales officer Rod Prosser

“We are building a best-in-class data team and capability, and in 2019 we will be trading on data-driven segments across all our digital properties.”