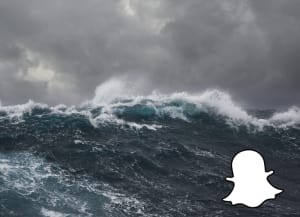 Snapchat is the next battleground for the lucrative millennial dollar. Move over Facebook, Instagram and Twitter, there's a new social channel in town and there’s perfect conditions for a swell.

Four years ago Snapchat had 100,000 users. Today its user base sits around the 100 million mark, with that number said to be growing everyday. From being branded meerly a tool for sexting, it has become a platform that blue chip brands and publishers are getting serious about.

In 2013, CEO and founder of Facebook, Mark Zuckerberg offered Snapchat founder Evan Spiegel US$3 billion for the app, despite the fact it had yet to monitise its offering, or even really show how it could.

Flash forward to today and it's said to be valued at US$16 billion and continues to raise venture capital funding. The app has its Discover offering as well as sponsored stories, geofilters and mobile ad units. Snapchat is primed and has just announced its first Australian office and MD (former News Corp NSW sales director Kathryn Carter).  This means the paid products that are available in other regions should become available here, such as sponsored filters, lenses, Live Stories and 3D video insertions.

Publisher Ziff Davis' gaming network IGN is part of the Discover platform. To service it IGN built a dedicated content team in the US solely to create content for Snapchat. IGN national sales manager, Daniel Scott, explained that partnering with Snapchat was about getting “There's been a perfect storm,” Scott said, for the photo sharing app and advertisers will benefit when an Australian office launches.

“Snapchat is doing great work ... and there's been changes to the Instagram algorithm and various things that has made Snapchat an attractive platform for advertisers,” he said.

“[Discover] was about broadening our audience – we tend to talk to an 18-plus gamer. [Snapchat] opened up a whole new demo– graphic for us and it has created a new way of chatting with that audience.”

Scott revealed that the results had “blown its [IGN’s] socks off,” with more than 50% of IGN’s Snapchat audience coming back to its Discover site five to seven times a week and consuming all of its content. Scott said that for him “that loyalty figure is the key measure of success”.

When it comes to brands being on the platform it's about being part of the cultural conversation. Huffington Post launched an unbranded pop-up story around sleep and Burberry was the first luxury brand to run a sponsored story. Disney launched a filter around the launch of its Jungle Book movie and Snapchat created a Purple Rain filter in the hours following Prince's death.

But, like with any activity, there are red flags. Just this month Snapchat faced a backlash in the US after a Bob Marley filter to celebrate 420 Day (which celebrates pot smokers) was criticised for being racist and insensitive.

However, managing director of We Are Social, Suzie Shaw, believes the app has incredible momentum that brands can tap into.

“Anyone who knows or works in close proximity to teens and young adults will know how actively they’re using the platform and how much affection they have for it,” she said.

“It’s been reported that up to 40% of 16 to 24-year-old Australians are using the platform daily. That's incredible. Basically, brands are piling in because there’s a huge, growing and passionate audience there.

”For Mondelez, which worked with Vice and Carat on a campaign for its Time Out bar, it says it’s because younger consumers like the immediacy of “little thrills” on Snapchat.

“We recently added Snapchat to our social media channel and in March we had fun launch– ing our new Zinger Black Burger via Snapchat and the response we received was great,” she revealed. “Over time our marketing has shifted from being purely functional to being emotional and we’re still on this journey. Snapchat is another medium for us to connect with fans and share the spirit and personality of the KFC brand and we will continue to learn through this channel. For us, it is about creating an authentic dialogue with our fans through social media.”

Snapping up the dollars

It's difficult for brands to monetise and measure their forays into the app, however, Gemma Hunter, MediaCom’s executive creative director and head of MBA (Mediacom Beyond Advertising), said this shouldn't stop brands dipping their toes in the water. It could even be beneficial, she added.

“Back in the day there was no measurement for all of the platforms that are now something you automatically put into a media plan – Facebook, YouTube etc.,” Hunter explained.

“There were no robust statistics; we were figuring it out as we went along from a media agency point of view and a brand point of view.

The point is that those channels have become enormous; I really think that the same thing is going to happen with Snapchat. So, it's actually kind of a good thing that you can't measure and rely on massive amounts of data and insight because it means you can test, learn and make mistakes. I think that's a good thing.”

Hunter suggested that if brands are utilising the 70/20/10 budget split, setting aside 10% of their spend for untested innovations, most should be using their innovation budgets to dabble in Snapchat. Carla Filia, senior manager for equity chocolate at Mondelez, believes messing around with Snapchat is good for marketers, adding that the company wanted its marketers to be fearless and experiment with new digital platforms.

Shaw believes that measurement isn't the biggest concern for brands right now, saying, “the sheer penetration and momentum of the platform amongst young people is reason enough to warrant brand investment”.

“Brands that are squarely targeting teens or young adults should make it a priority to think about the role of Snapchat in their channel mix and explore mechanisms for measuring the impact of activity,” Shaw said.

Snapchat's format may be a barrier to brands looking to enter the space because it doesn't offer a standard ad unit, but many believe that this is very much part of its allure, highlighting that it speaks to the new world order of advertising.

IGN’s Scott said there is a real shift in thinking from the “old advertising communication paradigm,” – building a story, teasing it into a brand message and then hitting consumers over the head with a call to action message at the end. The new model is really about capturing the consumer’s focus early on to earn their time.

“You've got to grab the audience’s attention straight away, in the first frame, in the first couple of seconds, and then you've got to earn their time and their engagement by entertaining them or educating them,” he said. “So we've flipped that paradigm on its head in terms of how we have to produce content.”

The biggest challenge for brands is realising every platform works differently and that the content and the way consumers consume it differs from platform to platform.

“You can't have that one size fits all model anymore. It used to be back in the day you'd come up with your TVC idea and then some print and out of home from the TVC,” Hunter said.

“Now you've got to plan what you’re doing on social platforms up front. I know that brands are finding that quite challenging. They're asking 'How do I make my money stretch across all my production needs and how do I know which channels are right for what I should be doing?'”

Drink brand Oak ran a coupon on Snapchat, created by The Monkeys, that users could screenshot and redeem a free product. It made use of Snapchat's short-lived nature, and as the platform allows users to see how many of their followers screenshot a snap, it also meant the brand had some kind of measurement metric.

Grant Flannery, interactive planning director for The Monkeys, said it’s important to remember that regardless of what new channel is emerging, the idea needs to come first.

“There's a lot of technology for technology’s sake, rather than having a reason to go there. Everything starts from an idea and it's about making sure technology is enhancing the idea rather than becoming the idea, which happens a lot,” he revealed.