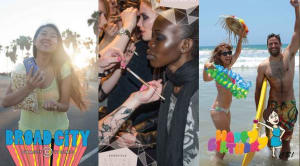 Days after naming a lead for its Australian operation, Snapchat has rolled out its first self-service ad offering locally.

Local Snapchat users and brands can now create their own on demand Snapchat geofilters, which allows both businesses and consumers to create their own images, and then select an area for them to be applied to Snapchats.

To mark the launch Snapchat is rolling out roughly 100 new geofilters to decorate locations across Sydney and Melbourne over the next couple of months.

Snapchat launched on-demand geofilters earlier this year in the US, UK and Canada and consumers have used them to geotag their for birthday and wedding location. Geofilters have also been used for major events such as SXSW.

Last week, AdNews revealed that Snapchat had named former News Corp NSW sales director Kathryn Carter as the general manger for its Australian business, with the social player setting its sites on growing its commercial operations in this market.

Snapchat has only just begun setting up operations in Australian and it is expected that as soon as the business starts to get embedded on home soil, the brand and consumer uptake will increase.

Need to know more about Snapchat? You can read our feature on Snapchat and the opportuntiy for brands in the current print edition of AdNews (29 April). Subscribe here or get it now on iPad or digitally through Zinio.