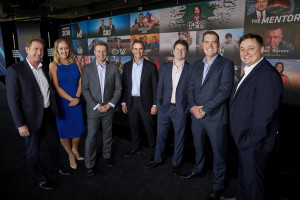 Seven's top brass at its Allfronts event in Melbourne on Friday.

Seven is launching a new freemium video on demand product that will allow viewers to access premium content before it has been broadcast on TV.

7 Plus, which rolls out next month and will supersede the network’s current video on demand (VOD) Plus 7, will feature a much larger catalogue of content than on broadcast TV. This includes TV programs from global production houses including the BBC, NBCUniversal, Warner Bros, 20th Century Fox, Disney, Sony and Discovery.

Seven will also commission content exclusively for the platform starting with a second series of Yummy Mummies, which performed relatively well on Plus 7.

This moves 7 Plus away from being a catch up TV service and more towards the SVOD space.

Seven West Media chief digital officer Clive Dickens tells AdNews that 7 Plus will be a freemium product where most of the content will be offered up to viewers for free but users can also pay to unlock premium content before it is broadcast on linear television.

“This provides us with the huge advantage of having millions of free users that funnel down into thousands of paid users rather than making it either a paid product of a free product,” he explains.

“You can view thousands of hours for free but if you want to go deeper you can unlock premium content and features.”

Dickens says that 7 Plus will allow users to view content offline, which Seven described at its upfronts event as ‘binge stacking’. This functionality follows recent moves by other VOD services in this market and elsewhere.

“The Yummy Mummies show did brilliantly well on catch up and less well on overnights,” Dickens says. “Sometimes there’s nothing wrong with the content but it’s distributed the wrong way. What the audience wanted to do with Yummy Mummies is watch it on their own terms.”

In producing the video on demand player, Seven says undertook extensive market research to find out what consumers and advertisers wanted.

A new innovation, Dickens points out, is allowing TV content to be consumed ahead of linear broadcast, ad free, offline and in higher definition.

He says that no other TV broadcaster he is aware of in the world allows content to be consumed ahead of linear.

This will appeal to hardcore fans who might want to watch popular shows ahead of their friends (for a fee), but also runs the risk of cannibalising the ‘wow’ moments of prime time reality formats.

When pressed on whether Seven would be allowing its major tent pole shows like My Kitchen Rules to be watched in this way, he said the network would “experiment” to begin with.

“I’m not going to sit here today and say ‘yes, we’ll do all’. I’m not even going to identify which ones we’ll do,” he adds. “It’s really about experimentation and recognising that the consumers have changed and we have to change.”

The move signals the growing importance of TV to follow shifting consumer viewing habits towards on demand viewing and binge watching.

It provides flexibility in how consumers pay for content, either through attention to advertising or by paying a fee to skip ads.

A key feature of 7 Plus is that advertising served on the platform will be addressable and this feature kicks off tonight with the Rugby League World Cup opener between Australia and England.

Effectively it means that viewers will be served more targeted ads digitally than on broadcast linear TV – an Australian first.

“The huge advantage that the 7 Plus team have had for a year is to start from scratch,” he says.

“Imagine building a house and putting all of your plumbing in instead of rewiring a house. That’s been a problem with the ad tech issues; people have being trying to bolt on and retrofit solutions on legacy platforms and products.”