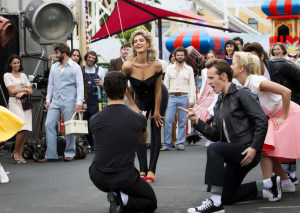 Seven CEO Tim Worner has promised advertisers, and viewers, better content for the year ahead after admitting that the network had a weak second half this year at the network's upfronts presentation in Melbourne today (Fri).

Worner faced the network's underwhelming performance head on but said major new franchises and television events ad well as renewals for some of its successful shows and a strong portfolio of sports events and coverage will maintain momentum throughout 2018.

“It wasn't our best year, and in fact, [2017] was our toughest year, ” he admitted to the room of media buyers and advertisers. “We like to think we set the bar pretty high for ourselves, and in the second half we didn't reach those lofty expectations. We came up short … we didn’t deliver the demos. Our audience has spoken and we need to refresh what we're doing, and we have.”

It was in stark contrast so Nine's upfronts two weeks ago where CEO Hugh Marks was able to reiterate how his network had hit all the goals it set itself the year before, including improving consistency through the year.

Worner added that the year ahead for the network would deliver surprises and innovations for audiences and for advertisers, including a slate of new programming, and a lick of paint for returning franchises to breathe new life into the schedule.

Seven's core messaging was around three things: content, audiences and connections – and how advertisers can get the most out of each.

Worner, who has been clouded in legal battles this year, batted away any suggestion that the Amber Harrison legal case took the network’s focus away from key programming and commercial efforts this year and told AdNews: “No, it all comes back to the content”.

“Personally I don’t think so … it's about the shows. If you have the right shows, everything gets a lot easier. It really begins and ends with the content. If you haven't got it, it's very difficult to compete. That's why we’ve put so much focus on that an getting ready for next year.”

Kurt Burnette, chief revenue officer, outlined the network's commercial strategy and talked about creating 'lightning' moments across its programming that bring audiences together, and offer advertisers “the most powerful marketing platform” across television, digital, on-demand, sport and events.

Seven's strategy for new shows is to “put what's not on, on” in “advertiser friendly” categories, says Burnette, and make sure that momentum from the first half of the year carries through to the second half. The network promised a Q3 and Q4 “like you've never seen from any broadcaster”.

“We believe this is the content that will make a difference to advertisers and delight viewers in 2018, creating outcomes and growing audiences. [Having] the largest audience also brings the power to deliver results,” said Burnett.

The network also outlined plans to reboot its marketing efforts for new shows that marketing director Ana Bbacic said would mean more stunts, activations, noise and amplification across social channels. Seven will also uses its tent pole sports content, including the Winter Olympics, Commonwealth Games and AFL, Melbourne Cup, and Rugby League as the launchpad for many of its programmes.

A refreshed slate: with new twists

Australian Spartan – Seven's answer to Nine's Ninja Warrior which was the runaway success of 2016. Seven hopes Spartan will create “event TV viewing, and during the season Seven is experimenting with cutting the ad loading in half, meaning there will be fewer ads and ad breaks to “improve the viewing experience” for audiences as well as improving engagement and cut through for advertisers, says Burnett. But it will come at a price so advertisers should expect to pay a higher price tag.

The First Wives Club and Back with the Ex - two dating and relationship shows, designed to capitalise on the interest shows such as Nine's Married at First Sight and Ten's Bachelor franchise have received from audiences. The first, follows a group of women, recently divorced and getting back into the dating scene, while the other reconnects a slate of former couples to see if 'the one that got away' was in fact 'the one'.

A biopic of Olivia Newton John starring Delta Goodrem and a Jimmy Barnes special, the return of Andrew Denton to TV with his new show Interview and the Good Doctor moving to the network.

The Wall – a game show format which seems to be a cross between Deal or No Deal, Wheel of Fortune and Connect 4 and promises contestants big cash prizes.

New shows that appear to be particularly built as advertising and product placement vehicles include reality shows Rich House, which translates into a Big Brother house for 2018 and The Mentor, a financial show hosted by Mark Bouris and targeted at small Australian businesses – and advertisers from the banking sector.

Other new offerings include nudity-focussed The Real Full Monty, Dance Boss and Instant Hotel - an effort to tap into the Airbnb movement.

MKR, House Rules and Little Big Shots will all return as will sports panel show The Front Bar, which will also go to the Commonwealth Games and the Winter Olympics.

Hell's Kitchen, one of the shows that did not do well for Seven this year will not be returning.

More to come on Seven's content, and tech advances for the year ahead still to come.