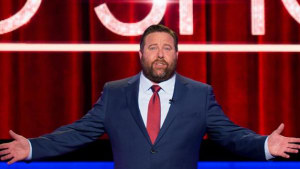 Shane Jacobson is the host of Little Big Shots

Seven’s Little Big Shots has made a strong start with its first episode pulling in more than 1.6 million metro viewers in the 7pm slot last night. Across Australia the show averaged 2.6m viewers.

It was the most watched program of the evening, beating Nine’s The Block's audience of 1.18m. The strong debut also justifies Seven's decision to move the premiere away from its original launch against Australian Ninja Warrior.

Little Big Shots, created by Ellen DeGeneres and Steve Harvey in the US, is a talent show for children and stars a range of passions, from sheep shearing to hula dancing to spelling champions.

While Little Big Shots was the rating winner of the night, The Block topped all key advertising demographics.

But unlike other popular talent shows, such as The Voice and X Factor, there are no categories and it is not a competition.
The show is hosted by Kenny actor Shane Jacobson.

Also in the prime time slot, 730pm, Australian Survivor drew an audience of 607,000 – a significantly smaller audience to that of Seven and Nine.