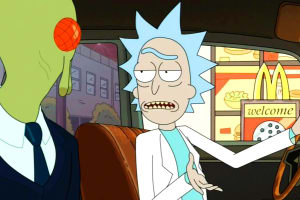 Fans of the TV show Rick and Morty are asking for McDonald's to bring back the Szechuan McNuggets dipping sauce after it was featured on the show's season three premier.

The sauce was discontinued shortly after its 1998 release to promote Disney film Mulan, but avid fans are now keen to see it restocked, with a change.org petition dedicated to the cause.

At present, the petition already has more than 10,000 of the 15,000 signatures needed. It is unclear if McDonald's will bring it back if the target is reached.

However, McDonald's has responded to the demand with a simple yet cryptic tweet:

A number of hashtags are being used on Twitter by fans keen to make it a reality including #szechuansauce.

Help make this happen. Not like there's anything more important to worry about https://t.co/bkln8DllsX

You know what we want. Make it happen.#szechuansauce

Be careful what you wish for.
This makes me uncomfortable. Specifically the "McNugga".#szechuansauce https://t.co/c8UO7W8gNy

The episode centres on Rick's efforts to find the sauce, which sees the the characters traversing through parallel universes and back in time to track it down.