Look the part for the Olympics with McDonald's branded active wear 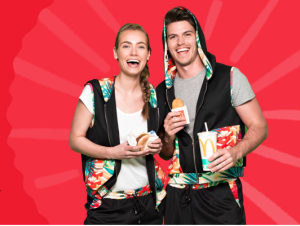 McDonald’s has launched a range of active wear as part of its Olympic sponsorship activation. An ad and an eBay store has launched selling the gear, which features a pattern made up of Big Macs and other key products from its menu.

The fast food chain has partnered with Aussie sports fashion brand We Are Handsome to produce the limited edition range.
Called ‘Legendwear’ to fit in with McDonald’s Olympics slogan “We’re for Legends’ the range includes tracksuit pants and a hooded top.

While the range is real, it’s designed to be in jest. MacDonald’s has taken a very tongue in cheek approach to its support of the Olympics in Australian this year.

The brand is a global sponsor of the Olympics, which kicks off in Rio later this month but the overarching activation in Australia is framed around supporting non-Olympians, with a very un-sporty campaign.

The brand’s website states: “Olympian or not, Aussies are legendary. It’s a fact and in our book legendary people deserve a legendary look. Maccas Legendwear is the perfect uniform for Aussie legends back home to wear as they cheer on the team at the Olympic Games in Rio.”

All the profits from the sales, which began yesterday (31 July) at 8pm, will go to sister charity Ronald McDonald House which provides housing close to hospitals for families of children undergoing treatment so that they can be close by.

The ads which launched last month celebrate Aussie legends “putting in the hard yards” from home by doing things like crawling out of bed to buy the all-day breakfast to watch the Games live no matter what time of day.