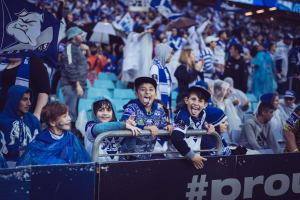 Nine has secured more sponsors and revenue ahead of this year's NRL season opener, including the high profile addition of McDonald's as the official quick service restaurant partner.

The fast food giant, which takes over from KFC, is making its biggest investment in the code.

Maccas will be joined by 13 other brands, including Holden, Telstra, Sportsbet, Harvey Norman and Bunnings (see full list below).

Nine sports sales director Sam Brennan tells AdNews the interest in rugby league from sponsors and advertisers is as strong as ever before and the sales team has managed to increase sponsorship revenue by about 10% on last season.

“The partner/sponsor model this year will be the strongest we've ever had in terms of numbers and revenue,” he says.

“Our rugby league [ad inventory] is just about full for March and providing the ratings continue how we expect them to, I can't see that not being the case for the remained of the season. In the short of long market, if the product is strong you won't have any problems filling advertising.”

Brennan says the durability of league as a product was demonstrated last year by the numbers that tuned in to Nine's coverage in spite of greater competition from Fox Sports, which simulcast games against the free-to-air network.

As a result, Nine's ratings took a slight hit with the average metro audience for regular season games attracting 405,000, down by 13% from 469,000 a year prior.

When it comes to the big games, league continues to deliver huge numbers that only AFL can compete with. Last year's State of Origin drew a record metro TV audience of 2.73 million for game one, and a bumper 2.67 million tuned in to watch the Cronulla Sharks win its inaugural NRL grand final.

“Cronulla was an outstanding story last year and you look at the teams like the Canberra Raiders who are on the rise after struggling for years, and the continued strength of the Melbourne Storm and Brisbane,” Brennan says, when asked about the code's broad appeal up and down the East Coast.

There's little doubt the unpredictability of league, which has seen every side in the competition make the finals series at least over the past five seasons, has helped cement its appeal to fans and brands alike.

The past two grand finals have been won by first-timers in fairytale fashion, which inspired this year's official NRL campaign Let's Make History.

The season kicks off tomorrow with the defending premiers up against the most followed club side Brisbane Broncos in what promises to be a mouthwatering opening fixture.

If that doesn't get fans excited, Nine's popular The Footy Show promises plenty of romance this year.