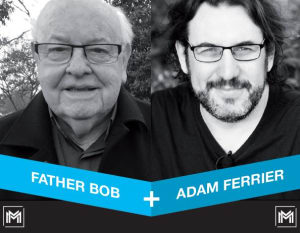 Father Bob Maguire and Thinkerbell’s Adam Ferrier will close the AdNews Media and Marketing Summit in Melbourne on August 2nd, in a one-on-one, no holds barred, conversation.

Father Bob Maguire is the renegade Catholic Priest from South Melbourne; the kind of cleric who set up a secular organisation to help deal with homelessness and disadvantage. The Father Bob Foundation aims to provide a voice for the voiceless and his online platform sets itself up as a 'parish without borders'.

Adam Ferrier needs little by way of introduction to an advertising and marketing crowd, and has just launched new agency Thinkerbell.

On paper (or perhaps hymn sheet) their worlds couldn’t be more dissimilar. However, in reality they deal in the same currency: capturing the hearts and minds of audiences that cross all demographics.

In conversation with each other, they will explore what it means to build a life around an intrinsic need or desire to convey messages, and the art that’s inherent in doing so.

In the mean time, check out the 2013 documentary made about Father Bob: In Bob We Trust, about Maguire's life and retirement was released in October 2013

Father and Ferrier will join Holden's GM of marketing Mark Harland, Universal Music, Lenovo and Mark Ritson on the speaker line up.

Also at the AdNews Media + Marketing Summit in Melbourne on 2 August:

The Melbourne event is 2 August at the Australian Centre for the Moving Image, in the heart of Federation Square. You can buy tickets now .

Carat is the event's Presenting Partner, along with support from Fairfax Media, The Trade Desk, Tonic Health Media. Rakuten Marketing and Tribe will lead the FastFront sessions, showing off the latest developments from their businesses .