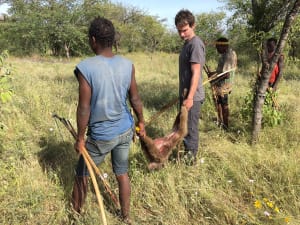 How many people tuned in to see Todd Sampson slay a monkey?

In this week's episode of Body Hack Todd Sampson joined an African tribe to live as a hunter-gatherer.

An audience of 486,000 metro viewers tuned into see the Leo Burnett chairman and Gruen panellist eat meat for the first time after 25 years as a vegetarian.

For the second episode of the show Sampson was tasked with slaying a monkey and adapting to the life and death realities of a tribe called Hazda.

The Ten show placed in the top five most watched programs for the key demographics of 16-39 and 18-49, but fell in the overall ratings behind The Block, X Factor, Cold Feet and Unreal Estate.

The Block attracted an audience of 953,000, topping the 7pm timeslot. X Factor followed as the second most watched program of the night, with an audience of 838,000 viewers. Last night's episode revealed former Spice Girl Mel B as the fourth judge for the show.

It is worth noting Body Hack is testing a different format for commercial television, being a science documentary in a flood of reality TV programs.