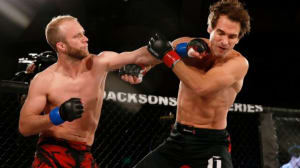 In the first episode of his new show Body Hack Todd Sampson wasn't pulling any punches, as he trained and competed as a Mixed Martial Arts (MMA) fighter.

An audience of 588,000 metro viewers tuned in to see the Leo Burnett chairman and Gruen panellist be punched in the face and choked out by a MMA professional.

The Ten show placed in the top three most watched programs of the night across all key advertising demographics.

Despite the increase for Ten, for a premiere episode its audience was low compared this year’s launch of ratings hits The Block, The Bachelorette, Survivor and Zumbo’s Just Desserts.

It is worth nothing the show is testing a different format for commercial television, being a science documentary in a flood of reality TV programs.

Sampson took to Twitter before the show to express his gratitude to Ten for broadcasting the show.

“Before Body Hack goes to air tonight I want to thank Channel Ten for taking a risk and supporting an original Australian science documentary,” he said.

There will be five more episodes of Body Hack exploring how human beings have adapted to extreme physical challenges.

The Block continues to reign supreme in the entertainment ratings, pulling in an audience of 931,000 at 7pm. Seven’s The X Factor, at 730pm, held strong attracting an audience of 895,000 for its second episode.

Ten’s Australian Survivor was the fourth entertainment program of the night with an audience of 660,000, behind 800 Seven’s 800 Words. Nine’s Unreal Estate saw 647,000 viewers tune in.