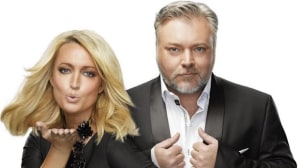 Today marks the fifth radio ratings of 2018, including digital radio ratings, with results representing 27 May to 30 June and 15 July to 18 August 2018.

In the fifth of eight radio ratings surveys for the year, the charts below (click to expand) show ratings across Sydney, Melbourne, Brisbane, Adelaide and Perth.

Sydney has a new winner when it comes to the prime time breakfast radio slot on the big commercial FM networks.

While Macquarie Radio Network’s talkback show 2GB always takes the overall breakfast spot, the coveted next position has long been held by ARN's infamous morning duo Kyle and Jackie on, in Kiis 106.5.

However, not this time, as the pair have been dethroned by rivals at WSFM breakfast.

Also in breakfast, Southern Cross Austereo's (SCA) 2DayFM breakfast trio of with Em, Grant & Ed suffered a drop of from a growing 4.3% share last survey to a 3.3% share now. The station had been on the up.

Kiis Network's national show featuring Melbournian “rising stars” ‘Will & Woody’, aka Will McMahon and Woody Whitelaw, dropped from 8.7% to a 7.4% share.

In overall listeners across Sydney, Macquarie Radio Network’s talkback show 2GB again pulled in the most listeners, with a sturdy 14.1% share of Sydneysider ears.

In second spot for total listeners was ARN's WSFM with an 11.3% share, followed by Nova's Smooth FM which took a 9.6% share - representing a 1.2 percentage point rise.

Looking at the digital radio scene in Sydney, ABC Jazz led the pack with 108,000 listeners, followed by ARN's Edge Digital channel, which has been going for four years, and earned 94,000 listeners.

See: Why Media buyers should be checking out Coles Radio

Melbourne by the numbers

In the fifth radio ratings of the year across the Melbourne market, 3AW remained number one with a 13.2% audience share, despite dropping by a further 0.6 percentage points since the previous survey.

In the FM battle, Nova's Smooth FM 91.5 took out the second spot for total audience share, reaching 10.4% and growing by 1.3 percentage points.

It was followed by ARN's Gold 104.3, which fell out of the top commercial spot, dipping by 0.9 percentage points, reaching an audience share of 9.9%.

3AW won the commercial radio breakfast slot battle, despite a small drop off from the previous survey, losing another 0.6 percentage points, with an audience share of 18.6%.

SCA's Fox FM breakfast show trio of Fifi, Fev and Bryon held firm in second position, with its audience share growing once again, this time by 0.3 percentage points, taking their audience share to 10.3%.

KIIS came in behind Triple M, with a 5.9% share, despite its audience share going up by 1.0 percentage point.

In the drive slot, Fox FM's drive show teams, Carrie & Tommy followed by Hughesy and Kate held strong in the top spot once again with a 12.0% audience share, despite dropping off once again in audience share, this time by 1.2 percentage points.

Gold 104.3's Gavin Miller came in second growing his show's audience share by 0.1 percentage points from the last survey, now with a 10.2% share.

Nova 100's Kate, Tim & Marty slipped to fifth place, despite growing its audience by 0.3 percentage points, with a share of 7.9% of Melbournes drive time audience.

The latest round of ratings was also the fifth inclusion of digital radio ratings for Melbourne. In total people, Double J had the highest audience, reaching a total audience of 74,000, growing its listeners by 21,000.

Coles Radio came in second once again with 65,000, up 1000 listeners since last ratings. 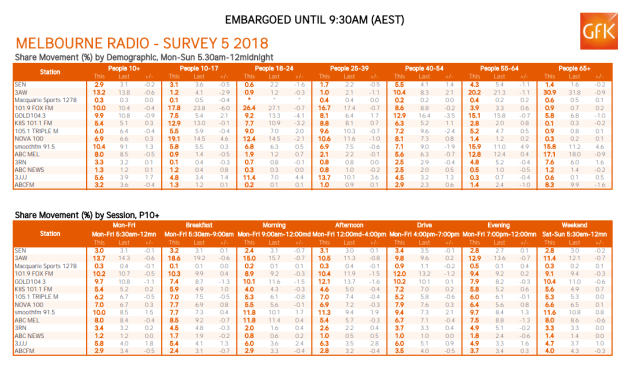 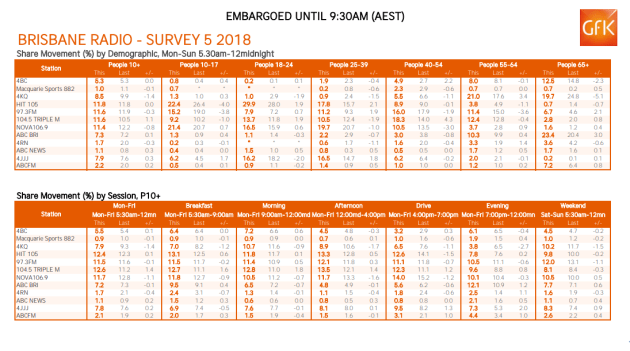 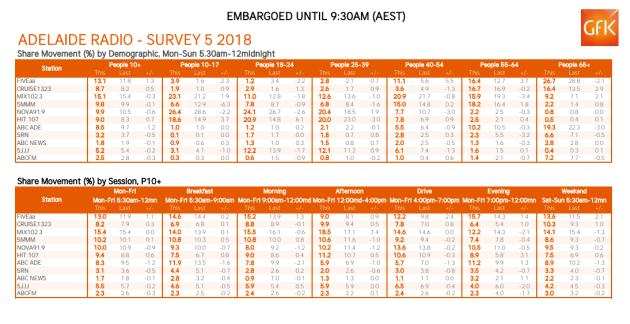 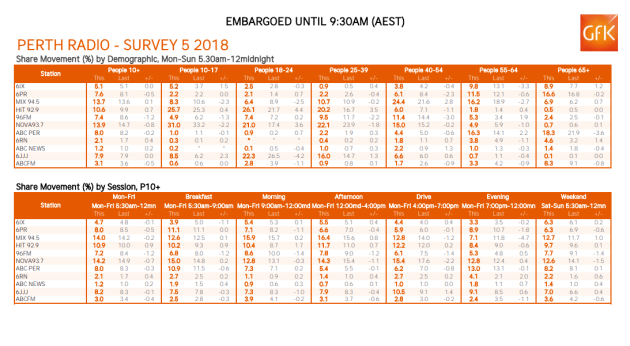 The next radio ratings are due out on 4 October.