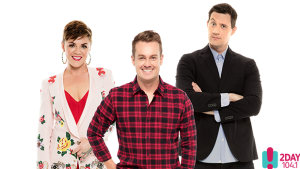 Today marks the second radio ratings of 2018, including digital radio ratings, with results representing 11 February to 3 March and 11 March to 14 April.

In the second of eight radio ratings surveys for the year, for the Sydney market, yet again Macquarie Radio Network’s talkback show 2GB pulled in the most listeners, with an 11.5% share of Sydneysider ears.

In second spot for total listeners, but first spot in the market's commercial music FM offerings, Australian Radio Network's (ARN) Kiis 106.5 earned a 9.5% share, up from 8.1% in survey one, representing a strong 1.4% jump.

Nova's Smooth FM came in next with 8.5%, followed by its main competitor ARN's WSFM, which had 9% share last survey, but has now dropped to an 8.5% share.

In the advertiser sweet spot of breakfast, between 5.30am to 9am, 2GB again wins out, with a 14.3% share of listeners.

Looking at the FM breakfast slots across Sydney, Kyle and Jackie O continued their dominance of breakfast, with a stellar 12.3% share – up from a 10% share in survey one.

With Kyle and Jackie O closing in on 2GB, should the AM station be worried?

Perhaps the silent star of the breakfast ratings is the 2DayFM breakfast trio of with Em, Grant & Ed, which earned a 4.4% share of breakfast, up from a 3.4% share in survey one.

The stats are the highest for 2Day Breakfast since survey eight 2013.

It may be the third year running SCA’s Sydney 2dayFM has had a new breakfast spot line up at the start of the year, following Rove & Sam in 2016, The Em Rusciano Radio Show with Harley Breen in 2017 and now for 2018, Em, Grant & Ed, but it may have been worth the wait.

In October the emergence of a new national drive show for the Kiis Network, featuring Melbournian “rising stars” ‘Will & Woody’, aka Will McMahon and Woody Whitelaw, was revealed. The latest radio survey results across the 4-7pm drive time slot shows the  Kiis106.5's pair are working wonders, having scooped an 11% share – up from a 9.1% share in survey one.

The second most listened to digital radio channel is ABC Jazz, with 95k fans, up from 77k. Third spot goes to SCA's Triple M Greatest Hits, which pulled in 81k listeners, up from 68k. 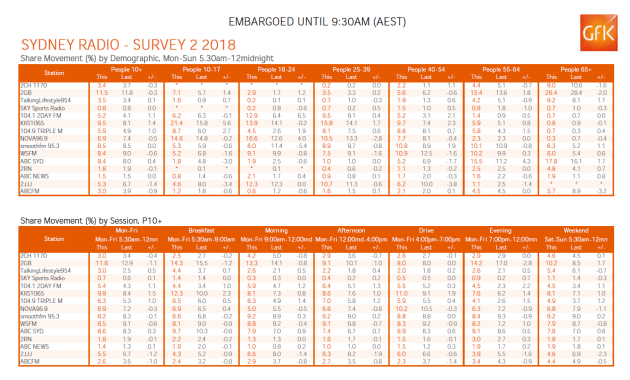 In the second radio ratings of the year, SCA's 101.9 Fox FM took out the top spot for total audience share, reaching 11.4% and growing by 0.6 percentage points.

For the AM stations, 3AW remained number one with a 13.7% audience share, growing by 0.5 percentage points.

SCA's Fox FM breakfast show trio of Fifi, Fev and Bryon remained in the top spot, holding on to its 10.3% audience share.

As a fan favourite among Melbourne listeners, the show has now proved its place at the top, after spending last year, repeatedly coming in second place to Nova's 100 breakfast program.

It overtook sister station Nova 100's Chrissie, Sam and Browny show, which was pushed down to third place, dropping off by 0.4 percentage points taking an 8.0% audience share.

For the AM stations, 3AW continued to reign supreme with an impressive 19% share in breakfast.

In the drive slot, Fox FM's drive show teams, Carrie & Tommy followed by Hughesy and Kate continued to impress, taking the top spot with a 13.4% audience share, up 0.7 percentage points.

Trailing behind Fox FM was both Gold 104.3 and Nova 100, which both tied for the second spot.

Smooth FM's Byron Webb was bumped down to fourth place with a 9.0% audience share, despite growing by 0.2 percentage points.

The second round of ratings was also the second inclusion of digital radio ratings. In total people, Coles Radio had the highest audience, growing by 10,000 listeners and reaching a total audience of 69,000. ABC Jazz came in second with 59,000, up 9000 and Aussie came in third with 56,000 total listeners, up 5000. 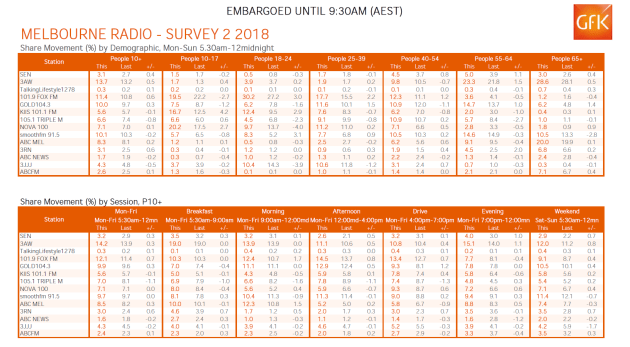 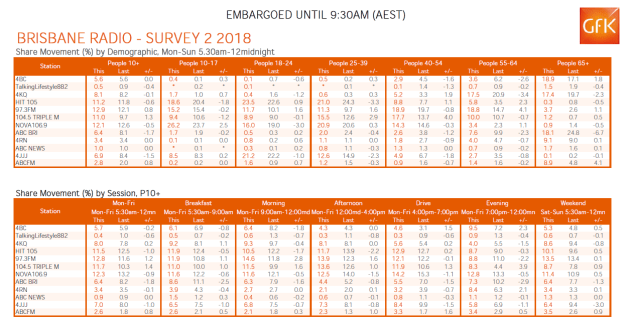 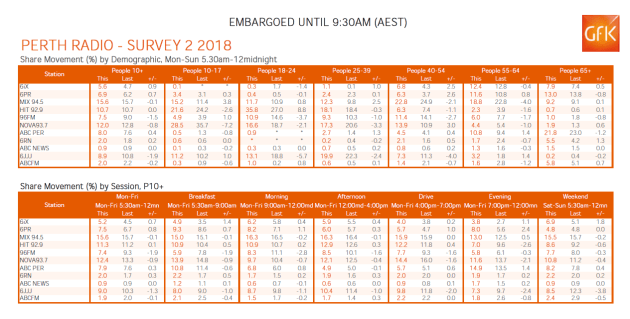 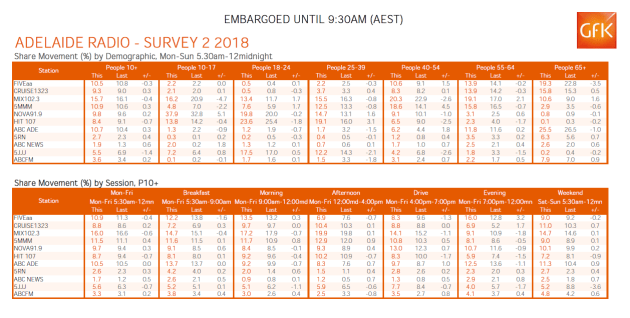