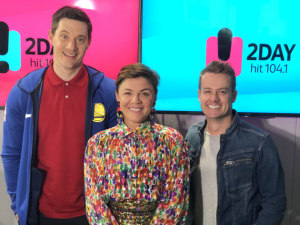 Today marks the third radio ratings of 2018, including digital radio ratings, with results representing 11 March to 14 April and 22 Apr to 26 May.

This marks a good hike from a 3.4% share in survey one and the 4.4% in survey two. The stats are again the highest for 2Day Breakfast since survey eight 2013.

This is the third year running SCA’s Sydney 2dayFM has had a new breakfast spot line up at the start of the year, following Rove & Sam in 2016, The Em Rusciano Radio Show with Harley Breen in 2017 and now for 2018, it's the 2DayFM Breakfast with Em, Grant & Ed.

While nowhere near the dizzy 2GB or Kiis heights, the rise demonstrates SCA's talent changes could be working.

Within the FM breakfast slots across Sydney, in second place for breakfast listeners is Kyle and Jackie O, despite a slight drop from a 12.3% share to a 11.9% share.

Across total listeners in the Sydney market, yet again Macquarie Radio Network’s talkback show 2GB pulled in the most listeners, with an 12.7% share of Sydneysider ears.

In second spot for total listeners, but first spot in the market's commercial music FM offerings, Australian Radio Network's (ARN) WSFM jumped up a healthy 1.3 percentage points to gain a 9.7% share. This is a big hop from fourth spot in the last survey and the boost saw it knock sister station Kiis 106.5 down to third spot with an 8.8% share.

Nova's Smooth FM came in next at fourth position with an 8.7% slice, followed by ABC Sydney with a 8.6% share.

The second most listened to digital radio channel was again ABC Jazz, with 104k fans, up from 95k. In the last survey SCA's Triple M Greatest Hits say at third spot with 81k listeners, up from 68k. However this survey is has shed 10k listeners, dropping to 71k listeners. ABC Grandstand now takes third spot, with 89k listeners

Make sure you are subscribed to AdNews in-print as our August edition takes a look at digital radio.

In the second radio ratings of the year across the Melbourne market, 3AW remained number one with a 14.4% audience share, growing by 0.7 percentage points.

In the FM battle, ARN's Gold 104.3 took out the second spot for total audience share, reaching 10.6% and growing by 0.6 percentage points.

3AW continued to reign supreme in the breakfast slot with an impressive 20% share.

SCA's Fox FM breakfast show trio of Fifi, Fev and Bryon remained in second position, despite its audience share dropping off by 0.9 percentage points, falling to 9.4%.

The fan favourite among Melbourne listeners, continues to prove itself as the leader in the breakfast show spot, after spending last year, repeatedly coming in behind Nova's 100 breakfast program.

It overtook Nova's smooth 91.5 FM, which came in equal fourth, with its More Music breakfast show hosted by Mike Perso growing by 0.4 percentage points to an 7.7% audience share.

Nova 100's Chrissie, Sam and Browny show, was pushed down to fifth place, dropping off by 1.6 percentage points taking an 6.4% audience share.

In the drive slot, Fox FM's drive show teams, Carrie & Tommy followed by Hughesy and Kate continued to impress, taking the top spot with a 13.3% audience share, despite dipping slightly by 0.1 percentage points.

3AW came in second behind Fox, taking an audience share of 10.4%, dropping off by 0.4 percentage points.

Gold 104.3's Gavin Miller came in third, once again, growing his show's audience share the most, reaching 9.7%, up 0.4 percentage points.

Nova 100's Kate, Tim & Marty dropped down to fourth place, falling by 0.8 percentage points, with an audience share of 8.5%.

The latest round of ratings was also the third inclusion of digital radio ratings. In total people, Coles Radio had the highest audience, growing by 5,000 listeners and reaching a total audience of 74,000.

In third place was ABC Jazz came and MMM Classic Rock at 59,000, with the latter growing its audience by 2,000 listeners. ABC Jazz listeners held the same. 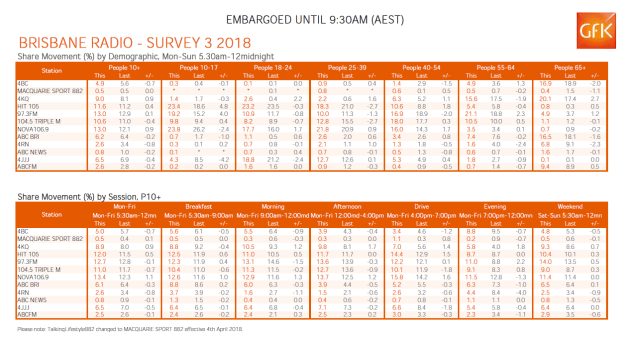 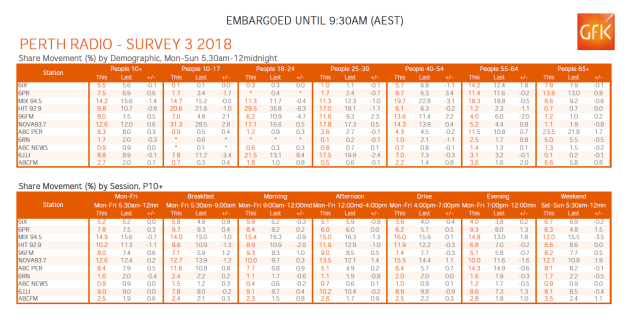 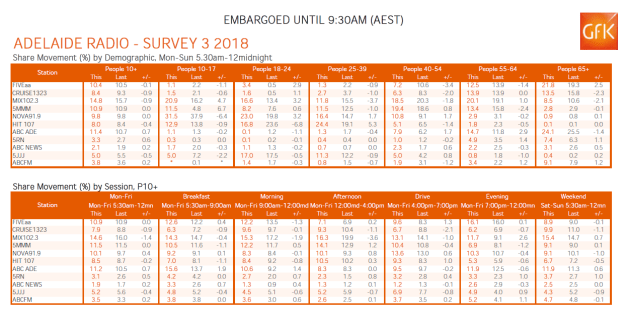