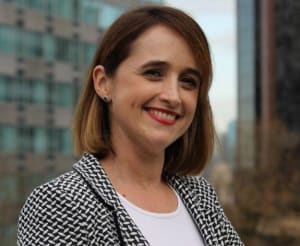 Kiernan took up the post at the start of the year and will be responsible for the NRMA brand.

The brand launched its first major new campaign under Smart's leadership in December. The emotionally driven festive ad was the first work to come from The Monkeys after the agency was appointed to handle IAG's creative business in September.

Brent told AdNews when the campaign launched it was the start of a new direction for the brand. Kiernan will now lead all aspects of the brand's marketing.

Read more about the campaign and brand strategy here: Brent Smart on making his first ad as a CMO

She exited Pandora in July last year when the music streaming site closed its doors in Australia. She had only been with the group for nine months having joined in October 2016.

Kiernan has more than 15 years of experience in marketing including stints at Yahoo, Vodafone and Ubank. Before Pandora, she previously led marketing at Seven and Foxtel's joint venture streaming site Presto before it was shuttered. It was rolled into Foxtel's on-demand platform Foxtel Play in October 2016.