Brent Smart on making his first ad as a CMO 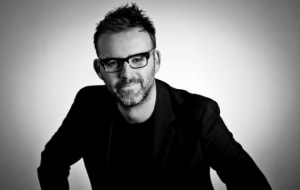 It’s the first Christmas ad the motoring brand has done, and it's deliberately emotive. It tells the story of grandparents at Christmas taking a road trip to visit their family, with the overriding message to “drive safe” at Christmas.

It’s the first ad that Smart has made as a client side CMO after spending 20 years on the agency side.

In the nine months since being hired by IAG to lead its marketing function, Smart has made some bold statements in market and is fast becoming the CMO to watch.

Speaking at the AdNews Media & Marketing Summit in May, one of his first public speaking engagements, he said: “People don't give a shit about marketing.”

In a profile interview with AdNews that appeared in the July print edition he talked about aiming for “audacious goals”. You can download that feature here through Zinio.

The campaign is the first example of what Smart has been talking about, and what he wants to achieve for the brand.
On how it felt to be on the other side of the process, Smart says it wasn’t difficult to step back from being on the agency side but it was “nerve-wracking”.

“I’m a bit blessed, [The IAG leadership] really supported me and believed in my crazy agenda. They trusted me to deliver so this has been a really great, positive experience. It was nerve-wracking as hell, because for the first time the shoe’s on the other foot for me. I’ve lost that excuse I’ve had my whole career of, you know, ‘the bloody client’, because I’m the bloody client now.”

“I’ve had a 20 year lesson on how to not be a bad [client]. But it was challenging. [AdNews], made it challenging for me by writing articles about my big, audacious goal. I’ve been pretty mouthy about doing great things, and most marketing being rubbish, and so you know, I felt that pressure. I’m pretty outspoken about the need for creativity and the lack of it, and I felt like there was a pretty big target on me if I didn’t do something good.”

It was a controversial move to hand the account to The Monkeys without a pitch, but Smart says that he knows that pitches put enormous strain on agencies.

He knew from seeing the work that The Monkeys had created for brands like Qantas and Telstra, they were the agency for him and his brand.

The work was developed and executed in under three months since The Monkeys were appointed.

“It’s a short time frame but I think it was really important that we made something together early, because I think it’s critical for agency relationships that we make stuff,” he explains.

“You learn so much about your partnership and about how you work by making ads. I think it was a bit of a dream process. The Monkeys landed it really fast and I’m pretty decisive, so when I saw it I knew straight away it was the right script.

“The other important thing is [as a client] to just get out of their way and let them do what they’re good at. They absolutely delivered so it wasn’t really a difficult and arduous process. It was actually a really quick and really enjoyable process.”

Smart says the Christmas ad is the “appetiser” for what’s to come from the brand, and is just the first part of its new direction.

For an insurance brand to tackle a Christmas spot is a left of centre move, but Smart says Christmas ads are becoming like the Super Bowl. He has previously cited the John Lewis Christmas ads as some of his favourite work, and the NMRA spot takes the same narrative - a storytelling approach designed to stir up emotions.

People can relate to the message and identify with the family in the ad.

“Everyone’s going to be watching a Christmas ad, so the pressure’s on and you better make a good one,” he says.

For him, it was important that it wasn’t selling a product message, but making a brand statement.

“I’m passionate about the need for brands to be generous and not trying to sell you stuff the whole time. There was an excellent opportunity for us. It’s great to have some brands that aren’t trying to sell you anything, they’re just trying to assure you and give you a very generous brand message at this time of year. So that was the philosophy."