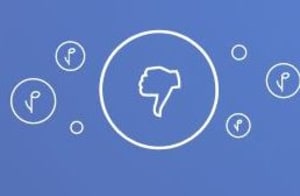 Pandora's final streaming date has been revealed today as the failed venture finally addresses listeners and thanks supporters. The app and website will cease to exist for Australian users as of 31 July.

After the shock revelation on June 27 that the music service would be no more, staff, who were said to be 'surprised' by the news, packed up their things and were gone by the end of the week.

It's thought Sydney-based founding director, business development and partnerships head at Pandora, Rick Gleave, was the last to switch off the lights this week after winding down all the deals. He was also the first to switch on the lights in 2012.

US HQ initially refused to confirm what this meant for subscribers and today is the first time it has addressed users. At the time it simply said that after “diligent analysis”, the firm would discontinue operations in Australia and New Zealand, wind down the service for listeners and instead “remain laser-focused on the expansion of its core business in the United States”.

A spokesperson today tells AdNews: “After analysis and consideration of external factors, we have decided to discontinue our operations in Australia and New Zealand and will shut down the service on July 31, 2017.

“While our experience in these markets reinforces the broader global opportunity long-term, in the short-term we must remain mindful and focused on the expansion of our core business in the United States.” 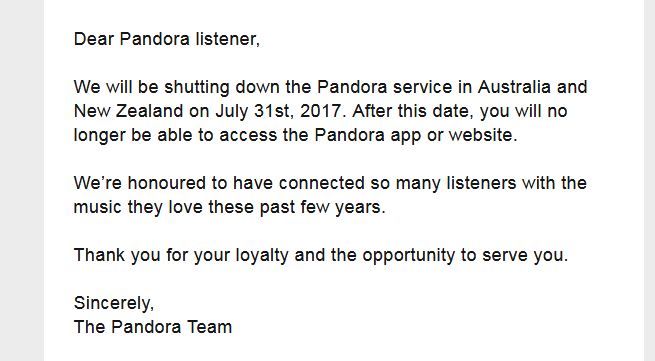 Just a few weeks ago Pandora was hosting music events, it launched an in-agency radio station for Carat Media, known as Carat Radio, and its in-store radio for Woolworths was said to have been going well.

It also recently did a deal with Rolling Stone to run branded playlists of the music and artists which appear in each edition of the magazine.

Gleave says he is honoured to have worked “with the talented and dedicated team leading the Australia and New Zealand operations”.

“Since we opened our doors in 2012, the team grew our user base to over one million monthly listeners, delivered market-shaping advertising and retail distribution deals and executed highly successful music events and sponsorships,” Gleave says.

Speaking to AdNews, GM marketing operations at Woolworths Rod Evenden says it had a “great relationship” with the Pandora team in Australia and are “obviously disappointed with the company's decision to exit this market”.

“We wish the team all the best with their future endeavours. Our customers will continue to be entertained by great music when they shop within our stores as we already have a backup source of music in place. We will evaluate our ongoing options to replace the Pandora service,” Evenden says.

Jane Huxley, former managing director of the Australian business, stepped down seven months ago. Perhaps a sign she saw the writing on the wall for the business she helped launch in Australia five years ago.

Taly Yaniv, director of revenue operations for ANZ, had been running the business in the interim and a permanent replacement had not been named.

Chris Freel led the commercial operation and Pandora recently appointed Sally Kiernan as its marketing director and tripled the size of its local marketing team to drive the business forward.