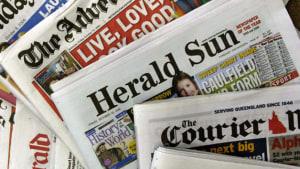 The Works has expanded its remit on News Corp, replacing Big Red as the lead agency for its metro and regional titles.

The news comes after The Works was appointed to the News Corp roster in July last year, replacing Archibald/Williams, and follows the agency’s successful subscriptions direct acquisition and engagement campaigns.

Big Red, founded by Ted Horton, has worked on the News Corp account for several years, leading its first ever brand campaign launch in February.

Owned by RXP, The Works will now manage creative strategy for retail and content marketing for News’ titles including The Daily Telegraph, Herald Sun, The Courier-Mail, The Advertiser and regional publications.

AdNews understands Big Red will continue to work on other projects for News Corp but is no longer the lead agency.

Since being appointed by outgoing CMO Tony Phillips, the agency has helped grow inbound subscriber sales from marketing channels by +45% year-on-year.

Bettina Brown, GM of marketing communications at News Corp, says: "The Works has proven themselves as a valuable partner on our subscription business and we’re confident that a full service partnership with them will be hugely beneficial to us meeting our all-of-marketing KPIs."

The Works founder and creative partner Damian Pincus adds: “We have been working very closely with the News team over the last year and have achieved some great results for the business, so it’s always fantastic when you are awarded new opportunities based on the team’s performance. News is on an exciting path and it’s great to be part of the journey.”

Recently undergoing a leadership shake-up, Paul Swann and Tom Harber were appointed to the newly created roles of managing partners at The Works while agency founders Pincus and Kevin MacMillan moved to work deeper within the RXP business.

At the end of 2016, News Corp shifted its media duties to MediaCom from UM. Its most recent campaign for news.com.au was done by Bohemia.