CNN has refused to air President Trump's first campaign ad for the 2020 election. The ad, which cites his presidency as the most “successful” in American history, argues that his achievements have not been fully recognised because of the “fake news”. The phrase, now synonymous with his presidency, is seen splashed across the faces of journalists from a number of American media outlets including CNN's Wolf Blitzer, prompting a refusal from the CNN to air the ad. CNN has defended its decision in a statement on Twitter, asking the “false graphic” be removed. The post says: “per our policy, it will be accepted only if that graphic is deleted”.

In response to the Donald J. Trump for President campaign’s accusations of ad censorship: pic.twitter.com/0Rbanpf0dn

The executive director of the President’s campaign committee Michael Glassner responded to CNN in a statement on Trump's website stating that CNN has “proven that it supports censorship, is biased and fears opposing our view.” 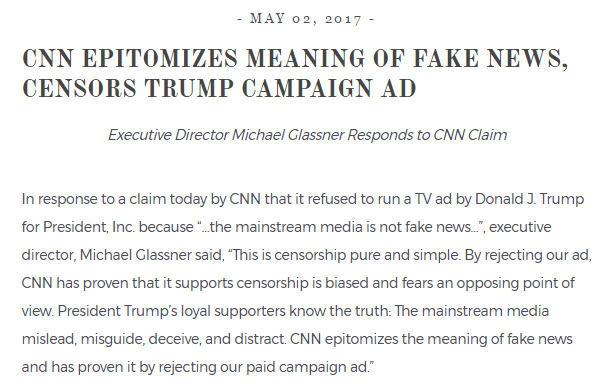 With Collective has joined the Isobar family, following the acquisition by Dentsu Aegis Network eight months ago. The addition establishes the Isobar Australia Group – which includes Isobar, Soap and With Collective under the leadership of Konrad Spilva, CEO of Isobar ANZ Group. The move sees With Collective leverage Isobar’s global network capabilities and strong skillset in data-led, creative customer marketing.