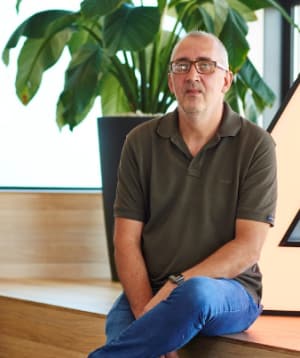 This time we speak to Dentsu Mitchell head of strategy in government services Eaon Pritchard.

With government we have the daily challenge of continually reaching large populations with messages and trying to create or nudge behaviours towards outcomes that benefit individuals and society as a whole. So no pressure, then.

There are big changes happening all the time right throughout the agency but in my sphere of influence I’m happy that over the last nine months or so we have rebuilt our strategy framework and philosophy to be soundly based on scientific principles and the real empirical evidence of how advertising works, and a strategy culture of scepticism, focus and simplicity. To try and counter the amount of nonsense that seems to be prevalent in the industry these days, we’ve gone back to the basics set out by the greats like King and Pollitt and adapted them for the current environment.

It is filled with very smart thinkers. I’m lucky enough that over the years I have become friends with some of them from all around the world, so if I’m ever not sure about a problem I can outsource my thinking to their brains.

Previous industry related companies you have worked at:

Since the late 90s/early2000s I’ve been around a bit. From pioneering early days of digital TV at Sky in the UK then we pretty much invented interactive/digital advertising at Weapon7 in London, I came to Australia as digital innovation director at Clemenger BBDO in 2010, then morphed into brand strategy at Sputnik/BWM, commuted up and down to Tassie helping Red Jelly for a bit, then did a year at King Content before joining Dentsu Mitchell last year.

Some ad tech engineers will probably have replaced me with a strategy AI robot. Sure, there’s only ever going to be more data available to us in the future, not less, and there’s only going to be more new technology. The challenge that will grow in parallel is in making better use of that data and technology through human understanding and creativity. I would hope there’s still big roles for people for like me in that space.

Ultimate explanations for human behaviour.
Broadly speaking, there are two ways to explain behaviour:
Firstly using proximate explanations. These kind focus on ‘how’ or ‘what’ questions. What are the reasons for a particular behaviour in the immediate environment? And how stimuli in that environment might move behaviour.
For the most part the focus of market research and tracking studies etc is on only the proximate causations.
Just as important though – and either neglected or not even considered - are the ultimate explanations. These deal with fundamental ‘Why’ questions. ‘Why’ questions look to find the ultimate evolutionary significance or function of behaviour.
Asking first ‘Why’ a particular behaviour or motivation exists rather than how it works and what happens as a result.
It’s not a choice between proximate and ultimate explanations, they complement each other. If we better understand these evolutionary or Darwinian drivers of behaviour then we stand a much better chance of designing the correct environmental, or proximate, interventions to get the outcomes we want.

Always use tit for tat. It’s an evolutionarily stable strategy.

Wherever the person who’s paying takes me.

Of all time? John Webster’s ‘Smash’ ads with the martians from BMP in the early 70’s. But then they are just about everybody’s favourites.

‘Daniel Dennett’s ‘Intuition Pumps’. Essentially a bunch of critical thinking ‘apps’ you can upload to your own brain.

‘Lie to Me’ with Tim Roth, the psychologist Paul Ekman was scientific consultant on the show. I can rewatch ‘The Sopranos’ over and over too.

I kind of stumbled into it, there was never a plan.