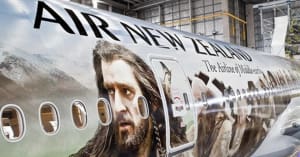 While normally a specific media agency within a network is put forward in pitches, AdNews understands it will transfer to DAN across both markets, possibly to avoid conflicts such as Carat Australia being a media partner for Virgin Australia airlines.

Despite DAN winning, it could later name one of its agencies as a lead.The move could play into the hands of Vizeum, which manages Air New Zealand in the UK and key European markets and has been building its New Zealand business after picking up one of the country's largest companies, Fletcher Building, late last year.

Vizeum could take on the account across both markets or manage it in Australia while another part of DAN picks up the New Zealand business. Another option would be to create a bespoke team drawing resources from across DAN to serve the client, similar to what GroupM has done with Vodafone.

While some could argue there's a conflict in Dentsu Aegis Network-owned Carat having Virgin Australia and Dentsu Aegis now having Air New Zealand, the pair do have an alliance and are code share partners and permit airline points sharing.

All agencies contacted declined to comment and Air New Zealand said the process is still under way.

The media review kicked off in September last year with several big network agencies such as MediaCom, Mindshare and UM, as well as local independent shops Slingshot, Bohemia and Atomic 212, taking part in pitches throughout December.

It is thought the airline, famed for its unique in-flight safety videos, was initially looking for separate agencies to manage Australia and New Zealand, but then later decided one agency would be best.

AdNews understands that independents Bohemia and Atomic 212 were initially frontrunners to the win business. Due to the recent storm Bohemia has weathered, with the loss of major accounts, AdNews understands the airline may have gotten cold feet. It's thought that Atomic chose to withdraw due to commitments in focusing on recent new surges in business.

IPG-owned FCB, a fully-integrated marketing communications agency with a strong presence in New Zealand, was also involved in the pitch.

It remains to be seen how the Dentsu Aegis Network win will transpire in terms of its specific agencies.

In another similar network-style approach, last week film studio 20th Century Fox ended its 12-year relationship with Zenith, in favour of its stablemate Blue 449. Both are owned by Publicis Media and in terms of who won the account after it went up for review, AdNews was told 'Publicis Media' won it as opposed to an individual agency, as is the norm. It only later transpired that Blue 449 took the win. See: Longstanding Zenith client 20th Century Fox moves $20m account to Blue 449