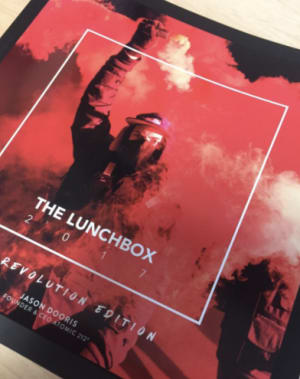 The Lunchbox is served

Creative and media agency Atomic 212 is back again with its marketers' handbook. The Lunchbox 2017, 'The Revolution Edition', is created by the agency’s CEO and founder Jason Dooris. It features a raft of Q&As from brands such as Origin Energy, AGL and Tabcorp, as well as views from top media execs from ThinkTV, Channel Nine, Seven, Bauer, ARN, Nova, SCA and more. TubeMogul, Adshel, Google and AdNews' very own online editor, Pippa Chambers, also feature.

Nine is live streaming NRL and AFL versions of The Footy Show on its AVOD 9Now. The NRL Footy Show, starring Paul 'Fatty' Vautin, Erin Molan, Beau Ryan and Darryl Brohman will air after Thursday night NRL games. This year's season will also have guest appearances by some of the game's current greats, including Johnathon Thurston, Billy Slater and Sam Thaiday. The AFL Footy Show, which stars Sam Newman, Billy Brownloess, Dave Hughes, Damian Barrett and Alex Rance will also run on Thursday nights on 9Now at 8.30pm. This year is the 24th season of both shows.

In line with International Women’s Day Facebook is celebrating the day with a 24-hour, around the world FB Live event titled #SheMeansBusiness. The event will feature key influencers and small business owners worldwide talking on the topic of women in business, and aims to encourage participation from people around the world to either watch the Live stream and/or create a Live themselves. As part of the celebration, co-founder and creative director of the Mamamia Women's Network, Mia Freedman, will be hosting a Facebook Live video at 10am today from Sydney. The celebration will conclude with a Live session with Facebook’s chief operating office, Sheryl Sandberg, from San Francisco. Everyone can participate by either viewing the Live video sessions, or going Live with a woman entrepreneur and using the hashtag #SheMeansBusiness.

News Corp chief technology officer Alisa Bowen will leave the media company after four years. Bowen has been in the role for just over a year and at News Corp since 2013. According to an internal memo, she has landed a role at Walt Disney US as senior vice president of digital media. To replace Bowen, head of technology Dominic Hatfield has stepped up to the role. As a result of the departure, the digital product and platforms team becomes part of News DNA, as well as the consumer, circulation and marketing team.

Cartoon Network appoints We Are Social

We Are Social has been appointed as Cartoon Network’s social agency. In its first activation, Cartoon Network is releasing Adventure Time themed donuts across Australia -a hit show on the children's network. Along with the doughnuts, an Adventure Time Snapchat filter will be available for a limited time.

News Corp’s new women’s network, With Her in Mind Network, has launched today for International Women’s Day. Plans to launch the Whimn network were unveiled last year to add more value to women's conversations and fill a gap in the market. This year, News DNA MD Nicole Sheffield revealed commercial initiatives that will be available through the women's platform, including shoppable video and native content. The new site joins the forces of brands, including news.com.au, kidspot.com.au, taste.com.au and vogue.com.au.

A hit for Hit Network this International Women's Day

Nearly 70,000 Facebook Live views have racked up on The Hit Network's 2DayFM breakfast show with Em Rusciano this morning. The Southern Cross Austereo-owned radio network made its Facebook Live video debut at 7am – allowing listeners to tune in visually for a change. The shift in delivery strategy was to celebrate International Women's Day and was spearheaded by Hit's head of content Gemma Fordham.

A video first for The Hit Network