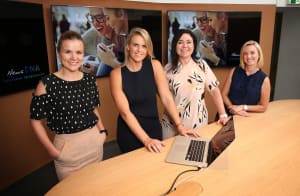 Shoppable video, native content, a focus on "visual journalism" and new ad units are all new initiatives News Corp is rolling out for brands as part of the launch of its women's network, Whimn.com.au.

Whimn, which stands for With Her In Mind, was announced at the end of last year with News DNA MD Nicole Sheffield at the helm. The platform launches next month, joining the digital offerings of female-skewed brands, including Kidspot, Taste.com.au, Body and Soul, Primped, Vogue and news.com.au.

Speaking to a room of execs from the likes of GroupM, the IAB and HM Communications at a News DNA upfront event last night, Sheffield said there has been a fundamental shift in what women expect from content.

Women: The major focus of News Corp this year

"The world has moved on... Women want a local site but they need a global flavour because our ecosystem is the whole world now," she said.

"With Her in Mind Network fills a unique gap in the market and will give brands an opportunity to engage Australian women in premium environments at scale," she said.

To ensure Whimn offers a global outlook, it has established a newsroom in New York headed up by former news.com.au journalist Charlotte Willis. It also has announced a content partnership with New York magazine owned site The Cut, with more deals to be announced in coming weeks.

"I believe you can't create content today in four walls. You can't create a digital property in one room, because its 24/7. You have to think beyond the team and consider other sources. We believe that we need those global content partnerships to resonate with her," Sheffield said.

Felicity Harley, the editor of Whimn, announced at the event two interesting content pillars: true crime and a live sexy diary. Through research, Harley said these were two areas are gaps in the market that women are increasingly interested in.

Whimn will have a strong focus on video and bold imagery, which Sheffield refers to "visual journalism". While video has been a major focus of many Australian publishers, News Corp is among one of the first in Australia to launch shoppable video, which allows consumers to purchase products in real-time.

"Harnessing the power of our content creation, data and the latest in technology, with our women’s network capabilities represents a significant opportunity for our commercial partners to connect with our engaged audiences," she said.

Tasked with doubling NewsLifeMedia's digital revenue, Sheffield will also be focusing on the viewability the network can offer clients, signalling transparency as a significant priority.

“In a crowded digital marketplace we stand out. The strength of News DNA is that we offer scale, guarantees and real impact with innovation in storytelling in all its forms, along with unrivalled connections with our digital audience of over 11 million Australians," she said.