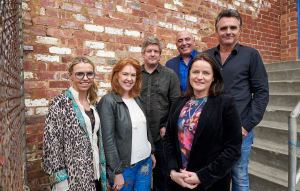 Mark Watkin has stepped down as managing director of BWM Dentsu Melbourne after four years in the role to “pursue a new opportunity”. Belinda Murray will replace Watkin who joined the agency in 2013 from TBWA. Murray has been with BWM Dentsu since 2008. As part of the leadership shake-up, ECD Simon Bagnasco has also left the agency after just over a year in the role. Amy Hollier has being promoted to fill Bagnasco's position. The new management team will ready the Melbourne business for increased work from Toyota, as the brand transitions its marketing operations to Melbourne in 2018.

Facebook is ramping up its artificial intelligence capabilities within Messenger with the official launch of M suggestions. The service will automatically add recommendations, allow people to save links (shown below) and emojis, and allow users to make plans, share content and initiate video calls. The service, which scans users’ conversations, is being rolled out in Australia, Canada, South Africa and the UK after a successful launch in the US in April. Visiting Australia earlier this year, VP of product for Messenger Stan Chudnovsky said M Suggestions will play a large role in bringing more brands into the Messenger ecosystem.

The Facebook AI bot will save links for later

Editor-in-chief Luke McIlveen is leaving the Daily Mail and taking up a role at News Corp.  The Australian is reporting McIlveen will take up the new role of executive editor at Fox Sports – owned by News Corp. He returns to News Corp, where he was editor of news.com.au, after exiting the business in 2013.