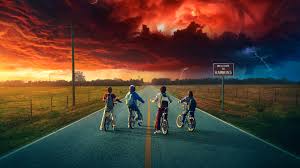 Netflix doesn't just ink deals with any one, but Australia’s very own Sydney Opera House is on the yes list.

The cult Netflix-original drama will stream live on 27 October at the same time as the global LA premiere and hours before the season drops on Netflix.

The nation's iconic landmark managed to secure a deal with the streaming giant – in a move you'd expect more cinemas to cotton on to. AdNews has enquired as to if any cheeky ads will be slid in pre or post screening.

The trailer for season two has already clocked up nearly 12 million hits on YouTube, suggesting a whole new level of fandom.

Hosted in Sydney Opera House's Concert Hall, it will be the largest of several premieres staged in major capital cities around the world including London, San Paolo, Milan, Madrid and Los Angeles - all timed during peak horror hysteria leading up to Halloween.

Entering an alternate dimension, super fans attending the Sydney premier will be treated to the supernatural world of the Upside Down, with the Opera House’s northern and southern foyers completely transformed into the world of Hawkins circa 1984, where the second series picks up.

Encouraged to dress up for the event, fans can expect to be fully immersed in a banging ‘80s soundtrack, arcade games including pinball machines and air hockey, themed food including Benny’s Burgers and much more.

Streaming player Stan is known for hosting events to launch new shows. From its Twin Peaks diner to bringing the famous chicken restaurant Los Pollos Hermanos to Sydney celebrate the the premiere of the third season of Better Call Saul, it has been leading the charge here.

Would the move suit the likes (and budgets) of free-to-air players Seven, Nine and Ten, or Foxtel?

“We are thrilled to present the world’s biggest Stranger Things fan event as part of the Opera House’s Contemporary Performance program – a home for visionary storytelling in popular culture.”

It remains to be seen how Netflix may market the event. In April this year Netflix revealed it would spend more than $1 billion on marketing this year, including an increase in programmatic advertising activity to drive member acquisition.

In July AdNews reported how more and more brands were also shifting budgets to experiential marketing in the form of boutique events.

The move followed hot on the heels of brands such as Meat & Livestock Australia’s recent Currency Kitchen, Heineken's beer events and Broadsheet’s exclusive dinners hosted for Holden and Diageo.