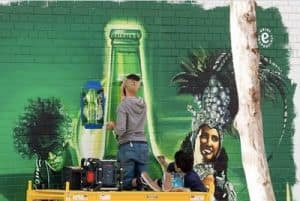 Global beer brand Heineken is investing more in experiential activities locally, in a bid to bring its tagline to life and to get consumers engaging on a physical level with its brand message.

To do this, it has just launched the next iteration of its cities platform, expanding the idea to a create a “major festival event”, which sees select Melbournians transported to a secret location where they are treated to a mix of international food, music, art and entertainment.

The event is called the Heineken City Shapers Festival and while the biggest activation is in Melbourne, there will also be smaller-scale experiences in Sydney, Perth and Brisbane over the next month.

“What we're trying to do is forge that deeper connection and give consumers more local and physical experiences,” she says.

“Heineken is world class at this globally, and we wanted to drive that home locally and give consumers in Australia an actual taste for what 'Open Your World' means. These events really bring it to life, because otherwise it becomes just a bit of a tagline to be honest,” she added.

As part of this push, the brand will also be investing in outdoor and PR, as well as rolling out limited edition packaging which will feature a variety of global cities. Heineken also has a long-standing partnership with Time Out magazine, which it will be utilising.

When it comes to what the brand is aiming to get out of the Heineken City Shapers Festival, Steel explained the brand is after reach, penetration and also creating more “adorers” of the brand. She adds that when measuring brand metrics, Heineken sees an uplift when investing in experiential activity.

“What we've found for the 18-29 year-old demographic is they're quiet allusive, they're watching less TV, they're increasing their consumption of outdoor, cinema and digital,” she says. They value the experience side of things. We have seen an uplift in brand metrics, which started with Cities and we had a really good uplift in our personality statements, adoration, and in penetration.

“We definitely do see that uplift with the experiential, and that's because we can do something both physically and locally with consumers,” she added.

Heineken will also be utilising influencers to get content out from the events, with Steel not ruling out launching the brand onto new social offerings such as Snapchat. While Heineken isn't on the photo sharing app just yet, she says the brand has been running tests and may enter the fray sometime in the future.

“Were looking at different communication strategies with the 18-29 year old demographic, and it's obviously where their focus is at the moment,” she says.

“We want to play where they are, but it has to be really relevant, we don't want to just do it because it's the next latest and greatest thing,” she added.

Earlier this month, in its latest stunt for footy fans fans, just one week before the UEFA Champions League Final in Milan, Heineken, with help from Publicis, took aim at a group of random guys out for dinner with their girlfriends in São Paulo.

When the men opened the menus they were greeted with a surprise message asking if they would fancy watching the UEFA Champions League Final at a Heineken party, for free, and if so, they had to gift their girlfriends with the attached voucher for a weekend at a spa.

We'll say no more, but watch the clip to see what actually happened. On YouTube it's pulled in more than two million views so far. Do you rate it? Comment below and let us know.