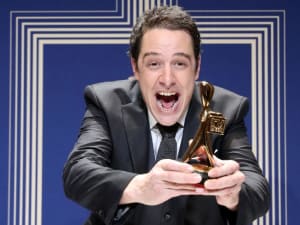 The award show did not fail to cause a stir, as host Dave Hughes took aim at Seven boss Tim Worner, who was not in the audience, as well as Grant Hackett and George Calombaris in a monologue that received a mixed response.

The biggest moment of the night was Molly Meldrum joining actor Samuel Johnson om stage as Johnson was being awarded the Gold Logie for his portrayal of Meldrum in the mini-series 'Molly'.

The Logies coverage is split into two consecutive shows, first the Red Carpet Arrivals and and then the show itself.

Last night saw the lowest TV audience for the arrivals segment, averaging 864,000 viewers, down 18% from last year. The Awards show was also down roughly 5% from 2016.

Overall, Nine brought in the highest audience, pulling in more than 27% of viewers. Seven trailed behind with just under 25% of viewers.

Ten's figures continue to drop behind ABC, with just 6% of Sunday audience, only 2% more than SBS's share.