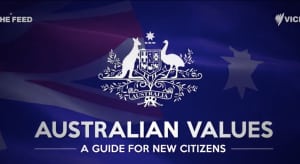 SBS show The Feed is once again trolling the government, this time for its recent decision to scrap the 457 visa for skilled workers. In a new spoof clip shared by the program, Mark Humphries addresses advices viewers on Australia values, such as sport, the impossible housing market, Russell Crowe and our occassional love for damper. Watch it for yourself here:

MasterChef makes its return in May

MasterChef has revealed the ninth season of the show will premiere on 1 May in the primetime slot of 730pm. The popular food program has been a ratings winner for Ten in the past and will see hosts Matt Preston, George Calombaris and Gary Mehigan return to the small screen. MasterChef is an important part of Ten’s 2017 programming slate following the dismal series relaunch of The Biggest Loser: Transformed, which has given the network a slow start to the year.