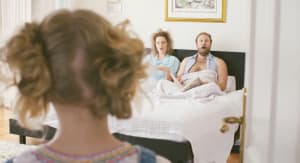 Marcel and Four Seasons Condoms have created an animation series designed to occupy children while parents do the hanky-panky.

The Extendables, a cartoon based on extraterrestrial puppets coming to earth, allows parents to monitor their kids by pairing smartphones to any tablet desktop computer, laptop or smart TV with a webcam.

Using motion sensor technology, parents are alerted when kids move away from the screen, so they know they need to wrap up their canoodling.

The concept came from a study which found a third of Australian parents had a fear of being interrupted during sex by their kids. A quarter (22%) of parents also reported having less quality time for romance and sex with partners at times when their kids are around, such as during school holidays.

“I’m the target audience. I’ve got two children – a three-year-old and a seven-week-old and I haven’t had sex for about four years,” Hawes jokes.

“The Extendables is Four Seasons’ way of highlighting the importance of this time. A healthy sex life makes for happier, less stressed parents.”

AdNews recently sat down with Marcel Sydney CEO Gavin Levinsohn and chief creative officer David Nobay about the agency's first 12 months, its future and its principles.

In other contraceptive news, FC2 have released a YouTube clip detailing the size, function and strength of the female condom.