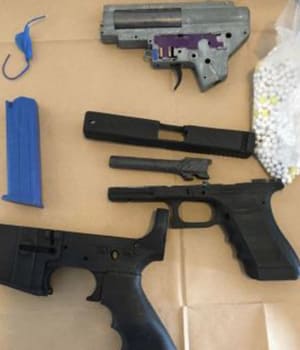 An employee at creative agency M&C Saatchi Sydney has been arrested and charged after making 3D printed guns and attempting to sell them online for up to $1 million.

According to The Sydney Morning Herald, Sicen Sun, aged 27, who is an advertising agency accounts manager at the global ad firm, caught the attention of NSW Firearms Squad after he created a post on Facebook trying to sell the imitation firearm.

The paper says the UTS graduate and “former Apple computers techie” printed the firearm using 3D printers inside his Waverley home that he shares with his girlfriend. Speaking on Channel Ten his girlfriend says he is innocent and that it's simply a hobby.

Of the seven weapons police seized, only one, an air pistol, was able to fire. Police also confiscated two 3D printers and digital blueprints which Sun says he found online.

Despite the fact the firearms cannot fire bullets, police say that is beside the point and “persons who posses these type of firearms posses them for one reason only and that's to commit criminal offences and commit badness”, Firearms Squad detective inspector Joe Doueihi said onChannel Ten.

The SMH says Sun was charged with multiple offences and it was also the first time NSW Police charged someone with possessing blueprints to manufacture firearms.

Sun's charges could carry up to 20 years in prison but a magistrate at his court hearing has said that it is highly unlikely.