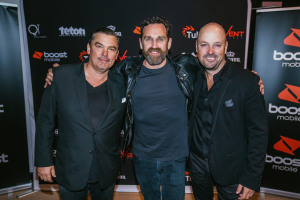 Lawrence and Cook are behind the critically-acclaimed documentary Bra Boys, about a gang in Sydney’s Eastern Suburbs, as well as First Love, Fighting Fear, You & Me and the TV Series The Crew (check out a showreel of their work below).

They will join Taylor Steele, an award-winning creative and filmmaker known for surf culture filmmaking and his work on Corona’s ‘From where you want to be’ campaign.

THIS already has two projects under its belt: a four-part TV series in partnership with Ripcurl and a multi-part content drive that brings to life Subway’s involvement with the X Games which will be broadcast on Channel 7 in October.

Additionally, the studio is working on a series for National Geographic and a major documentary with an LA-based film studio.

“Mick, Nick and Taylor are brilliant filmmakers and great storytellers. They have an impressive back catalogue of work and an inherent understanding of how to create engaging content for brands,” M&C Saatchi Group CEO Jaimes Leggett said.

“We’re already underway on a couple of new projects which we’re excited to share in the coming months.”

Cook said the pair were approached by several parties for projects but chose M&C Saatchi as the “absolute best fit for us”.

Lawrence added: "It’s an exciting time to be a storyteller. The three of us collectively felt there was a gap in the factual long and short form production market where we could tell the stories we wanted and get brands and business more authentically involved from the ground floor."

Lawrence said that involving a brand or product allowed the pair to go way beyond co-funding opportunities.

“When talent, purpose and messaging are in sync with a brand’s beliefs and values it simply makes sense,” he added.

“When done well, the model not only gives the film fans, followers and a story that profoundly resonates with the brand's target audience, it creates a lasting legacy for the brand.”

The new division follows a restructure throughout the M&C Saatchi group that has seen it close its retail advertising and design agency, 1440, as well as its merge its sponsorship and experiential business, M&C Saatchi Sport and Entertainment, with its consumer PR business Hidden Characters.