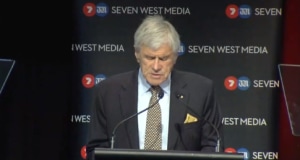 The chairman of Seven West Media (SWM), Kerry Stokes has taken a jab at the recent Nine/Fairfax mega-merger, which last week was approved by the Australian Competition and Consumer Commission.

Stokes, who was fielding questions from shareholders as SWM's annual general meeting (AGM), took a stab at the rival company when he was asked by an attendee if the business would look to take a similar merger approach.

"Good [partnerships] are starting to happen, we think there are good opportunities and we are going to take advantage of them," Stokes said.

"There is a lot of conversation as to whether we should 'get married' or not. Nine also have a wonderful program called Married at First Sight and thinking of that, maybe it's not a good responsibility for a corporate citizen, that being to get married at first sight. They seem to have chosen to have done that."

During the AGM, Stokes was firm in his stance on questions relating to ex-employee Amber Harrison and internal company culture.

Harrison, who earlier this year was found in contempt of a gag order, was the subject of multiple questions during the meeting.

One question related to the legal costs that had been associated with the case and as to whether the legal matters would continue.

"We dealt with Amber Harrison last year at the AGM, we don't intend to discuss her again this year," Stokes declared.

When pressed for details on the total costs associated with the legal action and handling of the Harrison case, Stokes replied that he wouldn't divulge “those financials”.

Questions were also targeted at incoming board member Teresa Dyson, who is the only female member of the SWM board.

Stokes quickly shut the down the line of questioning, adding that the company would continue to look for female members to join SWM's board. He slammed the question as "out of order".

Earlier in the meeting, SWM CEO Tim Worner lashed out at competitors, arguing the broadcaster has "more young people watching Seven than any other network by some margin".

His comments came in response to accusations from its competitors that the network had an aging audience. He said Seven's rivals were simply attempting to dismiss the network's achievements.