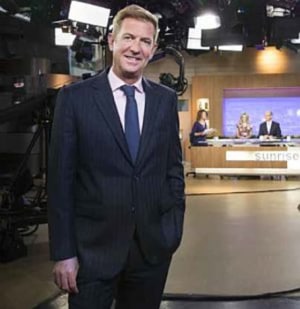 Seven CEO Tim Worner is “not happy” with the network’s performance over the second half of 2017, but says he is expecting a better performance in the first half of this year.

The network outlined its belief that its content slate for the year ahead has the “breadth and depth” to regain a lead on rival Nine.

It says the Winter Olympics is delivering “enormous audiences” and its multi-platform strategy is working.

For the six months ending 30 December, Seven West reported total revenue of $811.3 million, a 10% decline from $905.1 million in the same period the year before.

The company expects to report between $220 million - $240 million in EBIT for the full year, in line with previous guidance.

Of its profit, $2.7 million came from 'other ventures' which includes Yahoo7 and its investments in start-ups such as Airtasker.

Broken down, just $1.26 million was from Yahoo7, marking a major fall (61%) in the profit it contributed in the year before.

It has temporarily suspended the dividend paid to shareholders and says the decision is a “prudent capital management step to retain flexibility post relaxation in media ownership legislation”.

Speaking on SWM's investor call today, Worner said: “We like to think we set the bar high for ourselves, and in the second part of the year we didn't reach those; we missed our audience targets. We are very unhappy with these results and have taken appropriate steps.”

The group, which counts Channel Seven, The West Australian and Pacific Magazines among its assets, says the return to growth in the TV advertising market this year has been “encouraging”.

In terms of where ad revenue growth is coming from, chief revenue officer Kurt Burnette was quick to point out that Seven is not just looking at TV ad revenue, but the total video market.

He says growth was driven by elections in various states and the return of categories such as wagering and retail. He added that so far briefings from advertisers are showing increases in commitments this year.

“It's a combination of things, and we’ll take it from wherever we can get it, but as you've seen from some of the numbers, when we are talking about revenue going forward, it’s not just the TV market we're going for. We are very much in the total video market which is the broadcast and OTT market, [and] delivering great growth,” he said.

Burnette also outlined there would be initiatives from measurement body OzTAM this year around better measuring audiences across devices and platforms that would help the network better monetise its content and platforms.

“We lead [globally] in this country about how we measure broadcast and digital and that will turn out to be incredible beneficial in the years to come,” he says.

The group also flagged further cost cutting regime to save $125 million over the next two years as it attempts to turn itself into a “leaner, more agile company”.

It says it will save $40m this financial year and says its focus on cost control in the past six months resulted in a 13.8% decline in operating costs.

Worner says: “A dedication to cost control has permeated the company. We’re not stopping with these announced programmes.”

Worner said the company has “stress tested” its HR policies in the past year, but believes “they’re fine”.

“I think we've undertaken a little bit more work in terms of making sure our people know what the rules are. Certainly in the past six months we’ve undertaken a fair bit of work in that regard. But in terms of the implication of some sort of deficiency, I think that’s wrong,” he said.

Worner, who is on a rolling contract which some understand expires at the end of this financial year, emphasised his commitment to the role and to Seven West Media.

“I certainly do [want to stay on] I’m fired up. I don't think we went as well as we could in the half. We're better than that and I'd like to be a part of that team that proves that. It’s a rolling contract, it's all in the annual report, but there seems to be more interest in it out there than there is in my house.”

Seven West also operates a joint venture with Yahoo. Yahoo recently axed a raft of staff and put out a vague statement about a review of the business.

In today's financial update, the group said Yahoo7, which has 8.9 million unique visitors, is “undertaking a significant transformation … to adapt to trends in digital advertising and position the business for growth”.

Yahoo7 reported a 20% decline in total revenue to $8.7 million and reported BIT of $2.7 million, an improvement on the $3 million loss I reported in the first half of the year.

A year ago the parties committed to the Yahoo7 joint venture and said it was not at risk from Yahoo’s global acquisition by Verizon, but there remains broad speculation the partnership will be unwound, much like Nine’s former JV partnership with MSN.

When Verizon bought Yahoo, it regrouped and the organisation became known as Oath.

Despite reporting a 20.9% fall in total revenue to $72.7 million, the group is pleased with the performance of Pacific Magazines, which it says “continues to gain traction on its closest peer [Bauer] as it aligns strategy across digital and print revenue”.

While total ad revenue fell 29.3% during the period, digital now accounts for 25% of its ad revenue, a 7.5% year on year increase.

Pacific represents 26% of all magazine readership in Australia and delivered 2% growth.

Worner outlined five pillars of focus for the year ahead. Those are:

1. Focusing on the core and delivering stronger ratings and revenue driven by our major events and new programming schedule;
2. Transforming the business model to be leaner and more agile, maintaining our focus on cost reduction, delivering and exceeding the cost savings we promised.
3. Creating, owning and controlling more exceptional content and ensuring we are maximising the return on this investment with the most effective windowing strategy.
4. Driving greater adoption of 7plus and delivering on the product roadmap roll-out.
5. Investing in adjacent verticals where we can leverage our audience and brands.