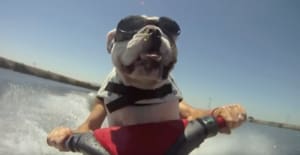 Dogs can jet-ski? Who knew?

Toyota is focusing on the new car feeling in four new ads that feature jumping babies, a group of Olivia Newton John wannabes and a dog riding a jet ski.

The ads, from OddfellowsDentsu, aim to show the happiness a new car can bring to owners, using the tagline “Now that’s gotta make you feel like this".

The spots differ from Toyota’s last campaign by Saatchi & Saatchi, which starred a little girl and her superhero dad.

The first ad opens on Kavalee boasting the Yaris’ features before switching it up to some interesting dance moves from two hipsters.

The next ad begins the same way but this time flips to show a slew of leotard-loving, sweatband-wearing flash dancers.

Another ad for the Camry shows some adorable bouncing babies set to an Irish soundtrack.

OddfellowsDentsu is the creative agency for Toyota’s retail advertising and in November R/GA won its digital account.

Do you think the Toyota and Subaru ads are similar? Comment below.