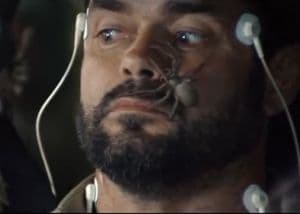 Toyota once had the famous tagline 'The car in front is a Toyota'. Now, the Toyota car in front is 'More Unbreakable Than Ever', as the amusing new campaign from Saatchi & Saatchi hopes to demonstrate.

It is a sequel of sorts to the wildly successful Unbreakable Drivers ad of September last year, in which potential HiLux drivers had to prove they had the requisite toughness and mettle to handle the rugged HiLux. This meant taking on numerous challenges, from being electrocuted to having heavingly hairy Huntsmans tap-dance their way across your face.

In the 'More Unbreakable Than Ever' ad, the HiLux itself is being put through its paces on an assault course of sorts, in which the challenges range from machine-gun force rain storms to your mate eating a burger and chips in the rapacious, messy manner of a starved hyena.

All this is overseen from above by a larrikin helicopter pilot, who quips his way through a colour commentary.

"Australia has some of the toughest driving conditions in the world and the fact that we test the Toyota Hilux right here in our own backyard says a lot about its Unbreakable stature. I also think there’s nothing like a good product demonstration to help show that the all new Hilux can take just about anything Aussie life throws at it," said Saatchi & Saatchi executive creative director Mike Spirovski.

The campaign is spread across multiple channels, including social, CRM, OOH, digital, key sponsorships and the TV spot.

“HiLux is one of our most important models in the Australian market, playing a fundamental role in our heritage and connection with our Australian customers," said Toyota's brand management and communications corporate manager Katie Thompson.

"With extensive local development the new-generation HiLux is the toughest, most comfortable HiLux ever, so it was an exciting opportunity to challenge Saatchi & Saatchi to communicate the advanced features in an entertaining way.

"Using the tongue-in-cheek humour that we’ve come to expect of HiLux, the new campaign does just that.”