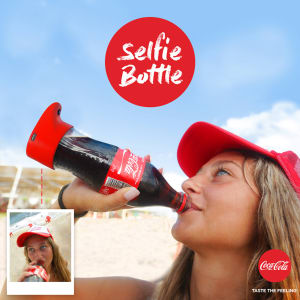 Coca-Cola has created a selfie bottle to snap pics while you sip the sweet stuff. Created by ad agency Gefen Team in Israel, the camera slips over the bottom of the bottle like a cooler and senses when the bottle is being tipped. Gefen Team created the bottle as part of Coca-Cola Israel‘s “Summer Love” event, and there doesn’t seem to be any plans to actually sell the bottle at retail or bring it Down Under – which is a real shame.

Fuel PR MD to head up WPP's Westfield
WPP AUNZ has appointed Amanda Galmes as MD of Sibling, which is an integrated agency, purpose-built specifically for Westfield/Scentre Group. She replaces Fleur Marks, who has moved into the newly-created role of WPP AUNZ talent wellbeing and development director, where she will develop and oversee a range of talent initiatives across the group. Galmes was co-founder and MD of independent communications consultancy Fuel Communications and has more than 20 years’ experience as a communications and business consultant.

R/GA Sydney wins Toyota digital business
R/GA Sydney has been named digital agency of record by Toyota Motor Corporation Australia and Toyota Finance Australia following an extensive tender process and competitive pitch. The appointment involves collaboration with Toyota across digital strategy, user experience, design and content management to create a leading-edge, connected ecosystem, deepening the company’s engagement with customers. R/GA says it was able to demonstrate an ability to deliver this vision for a seamless digital experience, and its transformative nature to the business. R/GA Sydney, which has more than 70 staff, also has Telstra, Macquarie and YouTube on its books.