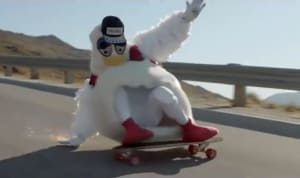 While KFC’s Plucka Duck may be the first human-sized chicken to ride a skateboard through uninhabited mountains, it certainly isn’t the first time we’ve seen this – in fact Ben Stiller pulled off the exact same scene when he starred in The Secret Life of Walter Mitty. This case begs the question, is the new Plucka Duck ad a blatant rip-off or a new age adaption?

If you take the scene out of Stiller’s skateboard ride in Iceland, you will see it is a perfect lift from the film. The only difference is Stiller isn’t wearing a Plucka Duck costume. Shot in New Zealand, it figures a desolate scene can only be replicated in a desolate country. With the striking similarities it would seem Plucka Duck intended to pay tribute to the film, rather than steal the concept completely.

With Honda paying homage to Ferris Bueller’s Day Off at the Super Bowl; Volkswagen’s tribute to Star Wars; and Nike referencing Back to the Future; advertising is indeed full of good movie references. The ruling is pop culture is fair game in adland. This judge just hopes Plucka Duck doesn’t borrow any more of Stiller’s scenes – can you imagine the human-sized chicken on the runway giving us ‘blue steel’?