How The Bachelor sponsors capitalise on the show’s success 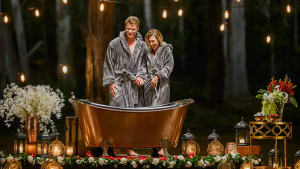 Login to Twitter or Facebook during any episode of The Bachelor and The Bachelorette and you’re sure to see hundreds, usually thousands, of posts relating to the show.

It’s this social success that Brad Garbutt, head of digital integration and content marketing, said holds the future for television and sparks interest from advertisers.

Speaking at an NGEN event held in Sydney earlier this week, Garbutt said Ten is using social platforms, such as Facebook, Twitter and Instagram, to continue the conversation around programs beyond the broadcast time.

“People used to think of TV as a medium where you would sit back and switch off. I think those days are over. What we do now with television is we have a one-to-many conversation with other people that are watching TV at the same time,” he said.

Garbutt believes Ten show The Bachelor is the best example of the convergence between social media and television.

“The Bachelor is the most social program we have on Channel Ten,” he said.

In the last season of The Bachelor starring Richie Strahan, brands, including Menulog, Dyson and Wrigley, live tweeted throughout the show. 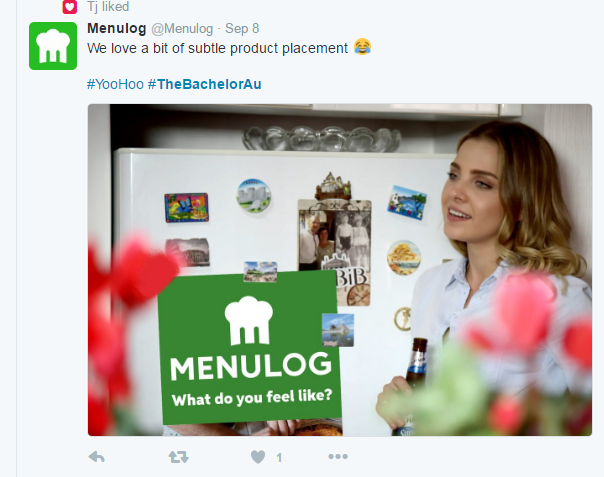 “These are brands we worked with to create content for them to engage with people who are talking about our TV show while it’s on air,” he said.

Network Ten director of revenue and client partnerships Rod Prosser previously told AdNews one of the “biggest shifts" this year with The Bachelor is that advertisers and sponsors are being drawn to the show to use its IP to monetise social media platforms.

“Sponsors have taken significant liking to The Bachelor IP outside the linear screen as well as being involved in the social media package and our digital offering. Our product doesn’t just sit on the linear screen,” he said.

The Bachelor trended on Twitter during each episode of the 2016 series. During the 90 minute finale, which drew in 1.3 million metro viewers, 30,000 tweets were sent with the likes of singer Guy Sebastian and sportsman Sam Burgess live tweeting throughout the program. It was the most popular regular entertainment show on Twitter so far this year.

“The ability to direct audiences from the television to social media and vice versa and engage with people after the program is why we invest in digital content. There is an opportunity for brands to align with these conversations,” Garbutt said.

For this season of The Bachelorette, which kicked off last week, sponsors including KFC and Oral B are tweeting throughout the program. 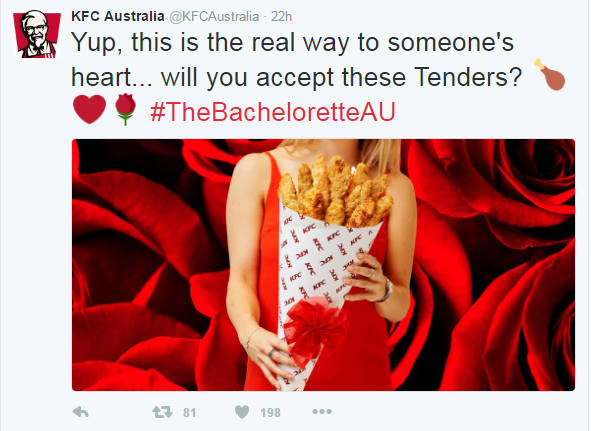 Oral B tells AdNews the sponsorship allows the brand to communicate various produt benefits through bespoke TV commercials, digital integration through Ten Play and social media through Facebook and Twitter.

“The Bachelor presents the perfect way for a brand to talk to consumers in a funny way and promote their product without creating an ad,” Garbutt said.

It’s this type of seamless integration that he said brands are looking for with sponsorship.

“The ability of having social media and talking to our audience in this way means we can talk to these people pre broadcast, promote our programs and create content for brands,” he said.

“This kind of content creation is what television is doing to renew itself and to create more of what people want to watch. It’s what we are doing to keep up with the future."