How Amazon Web Services is creeping into adland 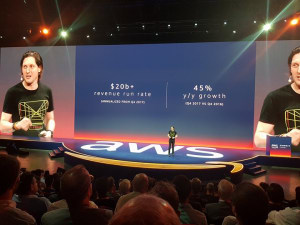 Amazon is having an impact on the media industry, but not in the way many would have predicted, or may necessarily know about.

A major part of Amazon's business that is sometimes forgotten is its cloud-based digital solution, Amazon Web Services (AWS). It's also a business that more and more media companies in Australia are aligning with.

Since opening a physical office in Australia in 2012, AWS ANZ has grown to a team of 1,000 as the company continues to make headway in the local media and marketing industry.

The company now boasts more than $US20 billion in global revenue and 45% year-on-year growth.

“We find in many cases they choose to develop those on us as well. I think the whole digital agency world is growing increasingly on the platform as they go from advisory work to building digital assets.”

Seven West Media chief digital officer Clive Dickens told AdNews that AWS is providing it with the tools it needs to make a bigger push into the live streaming and catch-up TV market.

Seven bought into a solution by Elemental, an encoding and transcoding technology provider once partly owned by Telstra. Now this is solely owned by AWS.

Dickens says since AWS assumed total control of Elemental three years ago, it has continued to play a vital role in streaming, most recently supporting the live coverage of the Commonwealth Games.

“That [buyout] really accelerated our relationship with AWS, because all of our core streaming services, whether it's MKR, Commonwealth Games, Winter Olympics, they all needed to start with a piece of encoding, hardware and software,” Dickens says.

“Australians' interest in streaming free live sport is rapidly growing and AWS is at the centre of our technology stack to make that possible.”

Dickens says this 'technology stack', developed on AWS' cloud offering, allowed the network to launch its live and catch up TV service, 7Plus late last year.

“Another key part of the technology is called CloudFront which is their content delivery network that ensures that every Australian gets the right stream at the right time on the right device,” Dickens says.

“We use them in the hosting of our websites, we use their machine learning as well to identify episodes for people. Discovery of that content is obviously really really hard so we are using machine learning to power and understand our predictions and the way in which the content is serviced to you.

Dickens says AWS is able to provide the same 'we recommend you watch' algorithm Netflix does, he says “it's not rocket science” and if you're an AWS customer it's available in its cloud.

AdNews recently ran a series on the impact Amazon is likely to have in Australia, including its work in search, voice recognition, Amazon Prime and e-commerce.