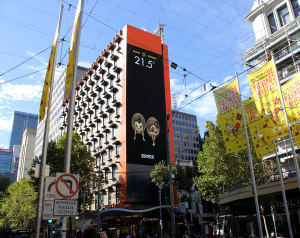 It's starting to get chilly outside and Bonds wants the men of Melbourne to sit up and take notice, with a seven storey, interactive billboard showing how weather impacts their “boys”.

The execution is the latest iteration under the award-winning 'The Boys' campaign, and shows the two characters reacting to weather conditions via a live RSS feed on Ooh!Media's iconic Bourke Street Mall billboard.

When the temperature drops, the boys shrink to the top of the billboard, and when the weather warms up they hang freely. In addition, when Melbourne encounters some particularly windy weather, the boys get swung about in the breeze too.

“There’s a lot your boys have to go through and that includes changing climates during the day,” Phillips says.

“So we designed a billboard that not only displayed the weather, but also showed men how their ‘boys’ would be affected.”

Digital out of home (DOOH) has had the capability to serve creative based on weather conditions for some time, but Ooh!Media's Brendon Cook says this latest campaign shows how matching the capability with smart creative can lift a campaign.

“While we pioneered a technology more than two years ago to serve up advertising based on average temperatures, this campaign takes it to a whole new level using live RSS feeds,” Cook says.

“Through our ability to innovate and Clemenger BBDO’s excellent creative, the campaign will drive much greater consumer engagement than previously possible.”

The billboard execution is part of the latest phase of 'The Boys' campaign which saw three new films released last week, with more anticipated through the year. It builds on the first iteration of the campaign which gathered considerable earned-media despite having a limited initial media investment and was a digitally-only campaign.