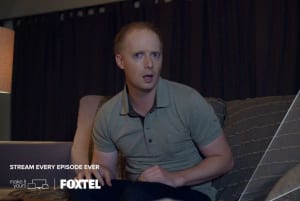 Foxtel is overhauling its branding with the launch of a new brand platform that sees it moves beyond price to push content and ease of use, as it looks to take on both streaming video on demand (SVOD) and free to air (FTA) competitors.

Foxtel director of content marketing Rob Farmer says the campaign is the first time in recent history that it has had a solid brand platform in which to communicate it point of difference to the fragmented television market.

More recent executions from Foxtel have seen it promote individual benefits, such as price, including a major campaign 18 months ago, that saw it drop its bundle cost to $25 a month.

The campaign was created by Whybin\TBWA, following a competitive pitch for the project, and sees the subscription television service adopt a new tagline, “Make it Yours”.

“This new campaign is really about having a big idea, a big long term campaign that can embrace all those different benefits.” Farmer says.

“I don’t think we have previously had an idea that has been as big to embrace all those different benefits so they’ve been tackled independently. But this time we’ve said right we want to have fewer creative vehicles in the market."

The campaign aims to push two key benefits of the Foxtel platform that it sees as a differentiator in the market: its content selection and streaming ability.

Whybin\TBWA CEO Paul Bradbury says that customer research undertaken by Foxtel showed that while Foxtel had a number of capabilities which customers wanted, there was a disconnect that meant many people weren’t aware the brand could offer it.

“This about driving reconsideration of the breadth and extent of what Foxtel has to offer. And not only breadth of programming but also the ways in which you can watch it,” Bradbury says.

“For various reasons some of the streaming services seem to have a perception that you can watch it on more platforms. Foxtel you can watch in just as may places. We just need to neutralise that perception.”

Sport in an obvious omission in the campaign, but Farmer says that is part of a “simpler communications architecture” that sees sport promoted separately through the “FoxSportingNation” brand platform by Cummins&Partners, unveiled in February.

Farmer says the new brand campaign is already in the planning stages for 2017, with Whybin\TBWA at the helm, working alongside Foxtel's inhouse agency Felix to execute. It marks a shift in Foxtel's agency arrangements as Clemenger BBDO had previously been its lead creative shop. AdNews revealed in November last year that it was looking at other agencies for the launch of this major project. Farmer confirmed that the agency was still working with Clemenger BBDO for a number of digital tasks.

The campaign also represents a major tonal shift for Foxtel, which Farmer says is representative of fragmentation in the television sector, which has seen the “empowerment of the television consumer”.

Whybin\TBWA chief strategy officer Hristos Varouhas says the campaign was built as a reflection of that, moving away from the “big statement” campaigns that Foxtel used to create to instead, looking at the service from the eyes of the consumer, celebrating the quirky ways in which everyone watches content.

“It’s through the viewer’s eyes rather than through the brand’s eyes and that’s a fundamental shift but we think a very important one," Varouhas says.

“If the viewer feels like they’re being sold to, that can work really well and I think Foxtel has a history of that working for them but this category is moving on. Foxtel is a leader within that and it’s taken a tonal position that is all about curating how the viewer connects to content and enjoys content rather than the brand telling them that.”

It also means that social media will be a large component of the campaign with content designed to build online conversations driven by particular shows on the Foxtel platform.

Farmer says while its content team has been creating gifs and other content, it’s aiming to encourage viewers to take to its channels with their own user-generated content.

“There is an emphasis of genres within this campaign as well which is drama and lifestyle orientated,” Farmer says.

“That’s the strongest next reason in terms of our differentiation of FTA and the other services and to do that justice you’ve got to eyeball it.”

Other big changes are afoot at Foxtel with speculation that Telstra could sell off its 50% stake, and other specuation that a merger between Foxtel and Fox Sport could be imminent.

Foxtel is set to welcome a new CEO as Richard Freudenstein steps down and is replaced by News Corp's Peter Tonagh. The network is also expected to shortly name a successor to current marketing director Ed Smith who is leaving to relocate to Europe.