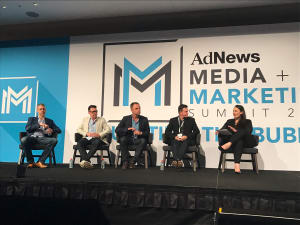 Innovation has supported the massive restructure Fairfax is undergoing that has seen it axe 125 jobs from editorial teams, according to chief revenue officer of Australian metro publishing Matt Rowley.

“If you look at the ways [Fairfax] could go, there’s only one way it’s going to end and we know we can’t go in that direction.”

“[Fairfax] is on quite a journey. It’s well documented that things began to shift five years ago and as people looked to chase trimming revenue lines with expense lines, we had rounds of cuts,” Rowley said.

“Two years ago our board looked at that and said 'we don’t think this is a trend that is going away, so what are we going to do about it and is there a way forward?'”

Rowley said the board came to the conclusion that “everything was up for grabs” as Fairfax looked internally at what it could do to remain profitable.

As it began to rework its model, which led to significant cost-cutting initiatives, Fairfax was criticised for pivoting to softer news and the future of its integrity was called into question.

“You probably saw some headlines questioning our commitment to print, only because all those questions were on the table,” he said.

“That culminated and the consultants got pushed out the door last year and that’s when Chris Janz came into the business and really started the process of getting us ready for the future.”

Under Janz’s reign, a $30 million editorial restructure was announced, as well as a commercial leadership overhaul that saw the exit of Tom Armstrong.

Since the end of last year, Fairfax has been overhauling its product build, including its technology stack and CMS system. Rowley said this is expected to be completed at the end of the year.

“In the design of that, we’ve gone right back from scratch and literally said 'what are the drivers of how people want to engage with news media?' and started from the ground up,” Rowley said.

The question put to the panel was if innovation was a genuine opportunity or a distracting gimmick.

While innovation existed in some parts of Fairfax, Rowley said it was important for Fairfax to build a 50-strong innovation team that could better pool the publisher’s resources and plug them into the business.

“It’s one thing to create innovation or buy innovation, it’s another to turn it into something that drives profit. That’s the trick and that’s how you get out of gimmick and falling into the chasm. That’s our approach,” Rowley said.

“The appetite is there. It’s always there. The key part is if you can deliver it in a form that can deliver performance and not just be in the end, an expensive fizz.”