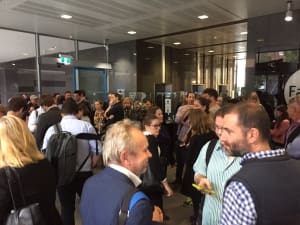 Staff at the Sydney Morning Herald and The Age in Melbourne have voted to walk off the job for a week following Fairfax Media's announcement that it will cut 125 editorial jobs.

The job cuts, which impact 25% of Fairfax's metro newsroom, are part of a $30 million restructure announced earlier this year.

It means staff will not cover the federal budget next week.

The strike brings into question the ability for Fairfax to publisher its newspapers during the strike, which could have significant implications for ads running during that time.

.@PoliticsFairfax staff walk out of the Parliamentary Press Gallery, joining their colleagues on a week long strike #fairgofairfax @abcnews pic.twitter.com/tashwP3fSN

A Fairfax spokesperson the company is disappointed by the strike, but it will not impact the production of its newspapers.

“We are disappointed in the decision by some of our masthead journalists to take unprotected industrial action for seven days after a month-long consultation period about necessary changes in our metro media business," Fairfax says.

"But it is not the first time we have had industrial action.  As in the previous episodes, we will continue to publish across print and digital as usual.”

Staff were informed of the cuts by email and in a meeting with Aylmer.

"While we will be looking across all parts of the newsroom, at the end of the redundancy program we expect there will be significantly fewer editorial management, video, presentation and section-writer roles," Aylmer said.