Despite experiencing a slight audience dip, The Sydney Morning Herald remains the most read title according to the latest release of Emma (Enhanced Media Metrics Australia) data for the 12 months to May 2015.

The Fairfax-owned paper has a total audience of 5.1 million, which is less than the numbers it drew last month, with the title drawing 5.4 million for the 12 months to April.

News Corp's The Daily Telegraph also experienced a similar drop, with the title going from 4.4 million last month to 4 million flat this month.

The drop puts it close to dropping to third spot, with News Corp stablemate The Herald Sun sitting with a readership of 4.092 million. This compares to the Daily Tele on 4.099 million.

According to the industry body for newspaper, The Newspaper Works, across print and digital platforms print newspaper media reach 16.4 million Australians over a four-week period, up 0.4% from 16.3 million in May 2014. While print readership declined 3.7% year-on-year to 13.9 million readers, digital readership grew by 3.2% to 11.7 million.

When it comes to magazines, the race remains the same but the space between players has gotten tighter. Woman's Day remains on top with a total audience on 3.37 million, however New Idea is gaining with the title sitting on 3.34 million. Website turned magazine taste.com.au saw a boost this month with its total audience rising to 3.2 million. 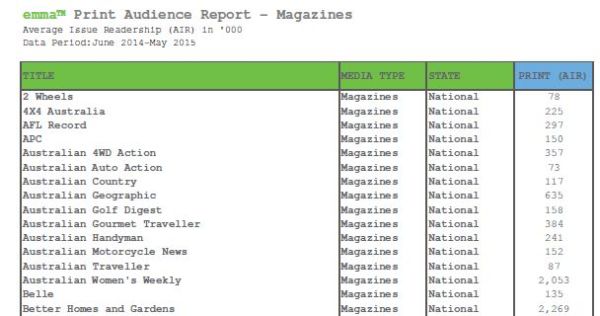