The Sydney Morning Herald has extended its lead as the most read newspaper in Australia according to the latest release of emma (Enhanced Media Metrics Australia) data for the 12 months to March 2015.

The Sydney Morning Herald saw a readership of 5.4 million, which is up from 5.2 million in the previous month. The Fairfax-owned title saw more than half of its audience gained from its online offering (3.6 million) with the title seeing a readership of 2.2 million in print.

The SMH was followed by News Corp-owned The Daily Telegraph, which drew an audience of 4.4 million.

Fellow News Corp-owned paper The Herald Sun also cracked the four million mark, with the paper getting a readership of 4.1 million.

The industry body for Newspapers, The Newspaper Works, said the latest release of emma data shows that print and digital newspaper readership remains stable at 16.3 million. With newspaper media reaching 92% of the population, 79% for print and 65% for digital.

Printed newspaper readership has declined 3% year-on-year as consumers continue their migration to digital platforms. Printed newspapers, however, continue to contribute the largest audience, with 14.1 million readers, or 79% of the population.

“The trend is now clear that consumers of newspaper media want access to news and information on the move and are using more devices to suit their needs. Digital readership growth on PCs and desktops is starting to slow, while mobiles and tablets continue their strong growth, up by 350,000 and 135,000 year on year respectively,” The Newspaper Works CEO Mark Hollands said.

See AdNews tomorrow for comprehensive coverage of the latest Audit Bureau of Circulations figures, which are released tomorrow. 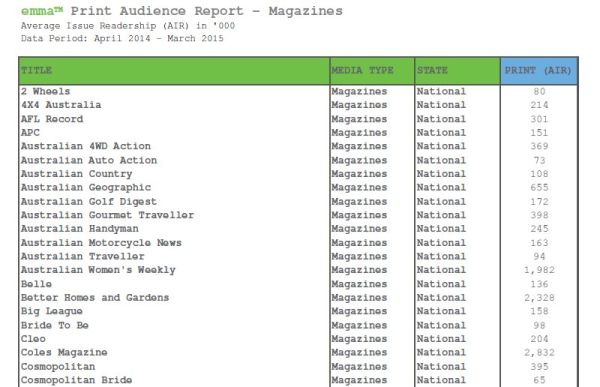