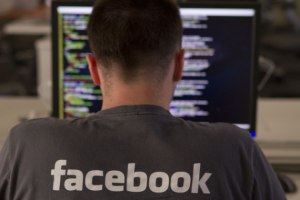 Analysts at eMarketer have compiled the results and worked out full year forecasts for advertising revenue based on reported earnings.

Here's how eMarketer sees digital ad revenue for for 2019: 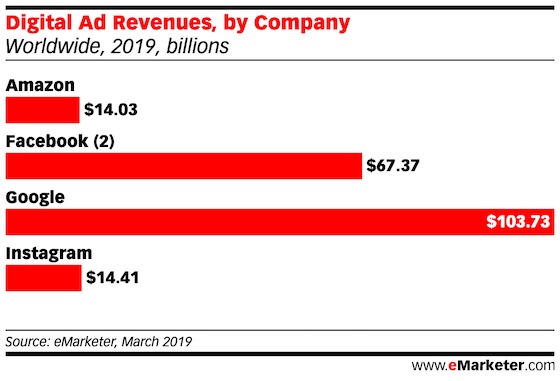 Alphabet, Google’s parent company, reported a 19% rise in revenue to $US38.94 billion.

“With a showing quite similar to Q1, Google’s Q2 earnings again display the moderating growth that has come to characterise 2019 for the company,” says Monica Peart, senior forecasting director at eMarketer.

“Strength in mobile advertising is holding search ad growth steady and in a positive turn of events, global currency positions are beginning to stabilize against the US dollar, giving Google ad revenues minor relief versus Q1.”

eMarketer estimates Google it will capture 61.1% of the search market worldwide, generating $US103.73 billion in net digital ad revenues this year.

Twitter's advertising revenue surged in the second quarter, growing by 21% to $US727 million compared to the same three months last year.

“Twitter’s value proposition to advertisers is not the size of its audience, but the engagement of its users,” says eMarketer senior analyst Jasmine Enberg.

“The strong growth in mDAUs shows that Twitter users are sticking with the platform, and that should resonate with advertisers. Next quarter’s earnings will show whether Twitter can keep up amid negative feedback over the website redesign rolled out in July."

eMarketer estimates Twitter will have 283.1 million users worldwide this year but its  share of worldwide social network users will drop to 9% in 2023 from 9.6% in 2019.

Facebook's numbers continued to grow, unhindered by on-going privacy concerns from users and brand safety concerns from advertisers. It reported better-than-expected results with $US16.9 billion in revenue, 1.59 billion in daily active users, and $7.05 in average revenue per user (ARPU).

Total advertising revenue for the business came to $US16.6 billion, with the US still pulling in the majority of the business’ ad dollars, at $US8 billion, up from $US6.1 billion the quarter prior.

The Asia-Pacific collected $US3 billion for the social media giant, up from $US2.3 billion a year ago.

This was reported the same day the company was fined a record $US5 billion by the Federal Trade Commission as a result of the 2018 Cambridge Analytica scandal.

“This company has repeatedly shown that it can grow both its ad revenues and user base, even in the face of enormous challenges," says Debra Aho Williamson, principal analyst at eMarketer.

eMarketer expects Facebook’s ad revenues to grow 22.5% this year to $US67.37 billion, including Instagram's $US14.41 billion.

Snapchat added 13 million daily active users in the second quarter, continuing the social media platform's rebound.  This brings the total daily active user base to 203 million, the highest it’s been since the company went public at the start of 2017.

“Clearly the relaunch of the Android app has had a meaningful impact on the Q2 user figures, especially outside of the US and Europe, where the Android operating system is especially popular.

"The popular face filters have also helped drive usage and engagement. Now, the challenge is to convince those newly added users to stick around and use Snapchat on an ongoing basis. As long as it continues to roll out compelling new features, it will do that.”

eMarketer estimates Snapchat will have 281.3 million users worldwide, an 8.5% increase over 2018.

And Snapchat's net worldwide ad revenues will increase 30% to $US1.36 billion, giving the company a 0.4% share of the global digital ad market.

Amazon's revenue from advertising jumped by as much as 37%, according to the online retail giant's second quarter results.

The Other revenue line in Amazon's earnings, which contains mostly revenue from advertising, showed $US3 billion.

According to calculations by eMarketer, Amazon's US ad business will grow 53% this year to $US11.33 billion. That gives Amazon an 8.8% share of the US digital ad market.

This year, 40% of Amazon's US ad business will come from mobile, up from 35% last year.

Australia wasn't mentioned in the results. International sales grew 12% to $US16.4 billion.

Amazon Advertising launched in Australia in April this year after quietly testing with a group of third party sellers on the local website.

In 2018 Amazon became the third largest digital ad seller in the US, ahead of Microsoft and Oath and behind Facebook and Google.