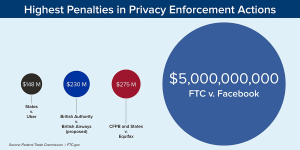 Facebook has agreed to pay a $US5 billion penalty to settle US Federal Trade Commission (FTC) charges that the social media platform deceived its users about their ability to control the privacy of their personal information.

The penalty against Facebook is the largest imposed on any company for violating consumers’ privacy -- almost 20 times greater than the largest privacy or data security penalty worldwide.

Facebook must restructure its approach to privacy from the corporate board-level down, and establish mechanisms to ensure executives are accountable for the decisions they make about privacy.

“Despite repeated promises to its billions of users worldwide that they could control how their personal information is shared, Facebook undermined consumers’ choices,” says FTC chairman Joe Simons.

Facebook, in its second quarter earnings announcement, said: "We have agreed to implement a comprehensive expansion of our privacy program, including substantial management and board of directors oversight, stringent operational requirements and reporting obligations, and a process to regularly certify our compliance with the privacy program to the FTC."

The fine comes from Facebook sharing user personal information with third-party apps that were downloaded by the user’s Facebook “friends”. The FTC alleges that many users were unaware that Facebook was sharing such information, and therefore did not take the steps needed to opt-out of sharing.

The FTC is also taking action against data analytics company Cambridge Analytica, its former CEO Alexander Nix, and Aleksandr Kogan, an app developer who worked with the company, alleging they used false and deceptive tactics to harvest personal information from millions of Facebook users

The massive fine isn't the end of Facebook's problems.  It faces at least two investigations related to monopolistic behaviour. The FTC has also opened an antitrust investigation and the Department of Justice says it will begin an antitrust review of market-leading online platforms.

In Australia, consumer watchdog the ACCC has finalised a report into an investigation of online media paltforms Facebook and Google. The report, which has not been released publicly, is with the federal government.

Facebook has more than enough resources to absorb the $US5 billion fine. Its latest balance sheet shows the company holding $US13.877 billion in cash or its equivalent.

And the latest results show Facebook's growth is unchecked by any concerns about privacy. In the June quarter, Facebook's earnings from advertising rose 28% to $US16.624 billion. Daily active users rose 8% to 1.59 billion on average.