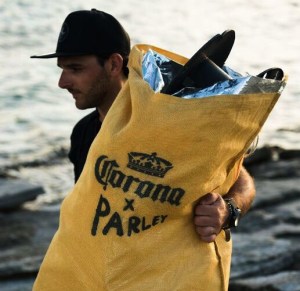 Corona has teamed up with Parley in an ocean conservation effort

The documentary, filmed by National Geographic, shows never-before-seen footage of Australia’s marine plastic pollution - where approximately one tonne of plastic debris can be found for every kilometre of coastline.

As part of their 100 Islands Protected initiative, Corona is investigating how the global marine plastic pollution issue is impacting some of our most pristine and remote paradises.

The documentary shows an in-depth view of the global plastic pollution epidemic hitting Australia’s Far North Queensland - one of the country’s most polluted stretches of coastlines.

It aims to act as a reminder for why Australians must urgently take action to reduce their single use consumption.

Speaking at a launch event in Sydney, Corona Australia marketing manager Andy Vance said the brand hadbecome synonymous with beaches around the world and due to that connection, it has a role to play in protecting them.

"Corona believes you should spend less time indoors on our computers. We want to get people outdoors and especially down to our amazing beaches and oceans. Sadly, more and more today those paradises are under increasing threat from this global marine plastic epidemic," he said.

"As brand that is all about the beach and ocean, we are also passionate about protecting them and we think we have a role to play in that financially."

Corona and Parley, the company behind Adidas' recylable shoe, partnered in 2017 with a commitment to protect 100 islands by 2020.

To date, more than three million pounds of plastic waste has been collected through Corona and Parley’s partnership globally and has seen over three hundred clean-ups take place in over 15 countries.

According to research commissioned by Corona, three quarters of Australians (74%) underestimate or have no idea about how much plastic is entering Australia’s ocean. However, findings show that when confronted with the amount of plastic entering our waterways, the majority of Australians (89%) said they will make an effort to reduce their usage of single use plastic

To bring greater awareness to the issue and encourage to reduce single-use plastic consumption in their everyday lives, Corona and Parley have also launched a national beach clean-up and educational series, Volunteers for the Ocean.

Volunteers for the Oceanwill cover 16 beaches across New South Wales, Queensland, South Australia, Western Australia, Victoria and Northern Territory, and is designed to encourage everyday Aussies to take action against plastic pollution on their local beaches and waterways.

In recent years, Corona has centred its brand purpose around protecting the oceans, which has been reflected both in its advertising and new products its developed.

Last year, in the lead up to World Ocean Day, Corona created a powerful outdoor campaign that showed how paradise is becoming a plastic wasteland, featuring Chris Hemsworth surfing a plastic wave.